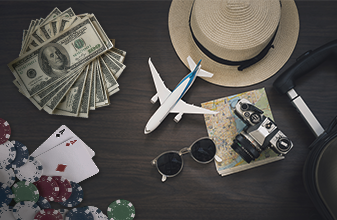 Here’s a general, hypothetical question: Suppose a low-stakes player was to bring only about $3000 on a trip, planning to just get in a couple dozen chunky red to light green hours during a business trip otherwise unrelated to advantage play. Then suppose further he were to more than quadruple it thanks to unexpected blessings from the gods of variance.

Now he might be worried about traveling through TSA, particularly if he played anonymously, right? Opening a bank account and depositing 5K or so, in a national bank chain (Chase, e.g.), would avoid having to travel with too much. Would said fortunate player be over-worrying this? Advice?

21forme: Don't worry about it. The easiest way to deal with it is sign up for TSA Precheck. If you fly for business, you should have it anyway to save time. Then, you don't take off your shoes or belt, you don't take your laptop out of its bag, and you walk through the old-fashioned metal detector with your bankroll in your pockets. I've taken many trips with a five-figure bankroll on me with no problems.

TSA doesn't care about your money. They did at one time, but have been sent memos it's not their job. The one time I had a minor problem was in a small midwest airport before this airport had Precheck. I held my bankroll in bank envelopes, along with my wallet, above my head in the body scanner. The TSA agent asked to see what I was holding. He opened my wallet, then looked in the envelopes and thumbed through the Benjies. He then asked how much money I was carrying. I said, "this is a domestic flight with no restrictions on cash and the amount I'm carrying has nothing to do with airline safety. If you have a problem with that, I'd like a private screening with your supervisor." He stared me down with an angry look and eventually told me to go on my way.

Broncosauras[sic]: As I see it, a bigger potential problem is driving at any point in your trip and being pulled over by a thief-with-a-badge employing the disgusting asset forfeiture laws.

ParlayView: I suspect the hypothetical player is breathing a hypothetical sigh of relief upon hearing this. :)

I drove to West Virginia once last year, business again, and more than doubled up between Wheeling Island, Meadows in West Pennsylvania, and another casino en route, and I remember on the drive home thinking "I hope I don't get pulled over." Because I'm a mostly-recreational counter playing low stakes just for fun, and only that once before have I ever had more than 3K on me. Ever. Normal people don't carry large sums on them; but then, I guess I'm a lot less normal than I was a couple of years ago when I started studying card counting.

Driving back from WV was an interesting feeling -- 50% geeky badass, "look at what I learned to do to nasty casinos" -- and 50% frightened -- "I'm driving through the middle of nowhere with out of state plates with enough in my pockets to make it worth seizing." Planning for a future when my bankroll and general proficiency have improved to the black chip level, I've actually put some thought into ways of transporting 20K+ which avoid the detection of police if pulled over. I feel no guilt about such preparations, since I'll have committed no crime, and will simply be trying to avoid being robbed myself.

Up until last year, I rarely walked around with more than $200 on me. Nowadays, I'm seldom less than 100 feet from a stash of $5K or more. What will I be like next year? In five years? I've watched every movie and documentary on blackjack you can find on the net no less than ten times, and I recall several of the Church Team in the film Holy Rollers talking about their "desensitivity" of the actual value of money. I'm beginning to understand that, I think. And I like it, too. I like these changes. I like all of it except for my feelings about police.

Every interaction I can ever remember having with a police officer was a good one (I'm white, which may or may not be a contributing factor). They were always professional, courteous, polite, and helpful as necessary. Half the football coaches I ever had, from the age of eight and up, were local police officers volunteering their time. I have two police officers in my family. And yet the thought of driving past a state trooper's car, even at exactly the speed limit, has me worried now. One of the unexpected prices of being an advantage player.

I don't like the thought that there is no longer anyone to protect me from losing the money I've studied hard to learn to win, because my would-be-protectors might be a bigger threat than a common street criminal. It essentially alters my mentality to the perspective of someone living in an anarchic state. I'm on my own. And again, what a weird feeling this creates -- 50% "why can't I be safe within my own first-world lawful democracy?" -- and 50% the sort of exhilaration that the protagonists of a good heist movie must be feeling, getting away with the loot.

It's not just about getting the money out. It's now: get the money out, haul it all in, and escape without detection, sneaking back to your lair. It adds to the excitement, I suppose. But it also adds to the risk. Money. Money changes everything.

Youk: I've never had problems bringing cash on domestic flights. I've had plenty of cash on me, and significantly more than $10K many times. No problems putting it in my carry-on suitcase.

One time I was stopped to check for drugs on my hands and had my bag searched. The cash in the bag was not an issue. I told them I played a lot of poker, and they had no problem with that. I haven't had any problems with international flights either.

zerg: When I was selected for additional screening for the first time, and had more than $10k on me. They searched everything right in front of me -- opened my money pouches, looked in, and closed them back up with no questions. It was quite a relief. It takes awhile to get used to carrying a lot of cash, but you soon feel comfortable with it.

Ryemo: On a recent Las Vegas trip, I carried well over $10K with me but had no issues. I didn't want to leave all the cash in my bag, so I walked $9K through the scanner in my pocket. The TSA agent asked me to empty my pocket and I pulled out a big wad of $100's. He took it out of my hand while he patted me down a little more and that was it. Quickly handed the cash back to me, didn't ask me any questions about the money, and he didn't look fazed. They probably see a lot of money walk in and out every day, especially at McCarran Airport. If you're really concerned, you could purchase a money order or cashiers check for a few grand. That way you're not actually walking around with cash.

EmeraldCityBJ: While I travel with five-figure bankrolls frequently and have never had problems, it doesn't hurt to take some precautions in case you run into that one TSA agent who missed the memo.

The primary thing is to make sure your stuff is packed in such a way that doesn't trigger a secondary search. Follow the rules (e.g. 3-1-1 items), and avoid packing clumps of chips, players cards, or other items that might look suspicious on the x-ray. Avoid putting large clumps of cash somewhere on your person which will trigger a pat down if scanned by the nude-o-scope.

Cougfan: I have never had any significant issues, but I have encountered two ignorant and ultimately harmless TSA agents. My last encounter was when I was flying domestically and had $25K in my pocket. I went through the walk-through metal detector and the TSA guy asked me what I had in my pocket. I showed him the pouch; he asked me to open it. I did. He then asked me how much money I was "declaring.” I told him that I wasn't making a declaration since it was a domestic flight. He asked the same question again. I told him again that I wasn't making a declaration but that I had around $27K in cash. He waved me through.

The other case required getting a TSA supervisor over to educate the line agent. There are some ignorant TSA employees out there (not surprising given the pay and working conditions for that job), but the supervisors are generally knowledgeable.

Also If carrying money orders it doesn't hurt to have them signed to yourself as well.