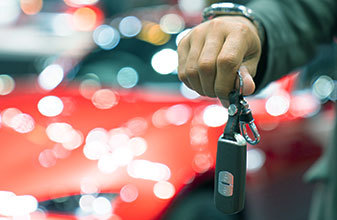 LV Bear: I was Car Renter #001. On a recent blackjack trip to Kansas City, I rented a car that had no license plates; the temporary paper sticker in the windshield had been issued that day. The car had four (yes, only four) miles on the odometer. Of the hundreds of cars I have rented in my life, I don't recall ever being the first customer to rent a particular car, except on long-term leases.

Ironically, I put about 1500 miles on the car. After thinking about it, I became concerned that the lack of license plates or a temporary tag visible from the rear of the car would make it of interest to police. My two biggest safety concerns when traveling these days are (1) Getting robbed by police in a bogus cash seizure or just plain armed robbery, and (2) Physical attack or injury caused by out-of-control casino guards.

Marvin Marshall: Happened to me once... almost caused a wreck. I had a brand new (10 miles on it) rental from Hertz in Las Vegas. I noticed that the windshield wipers were yellow; I thought that it was some new Hertz thing since yellow is the Hertz corporate color.

As I was driving towards my first casino, the skies opened up and rain started pouring down. The wiper blades seemed defective: they were smearing water around, and making the situation worse; visibility was close to zero. I made it to a gas station along the way and waited out the rain.

As I inspected the wiper blades closely, I realized that Hertz had neglected to remove the yellow plastic protective sheaths from the blades. I felt silly not noticing it earlier; fortunately there was no harm done. But, if you happen to be renter #001, check the wiper blades just in case.

Freightman: Along the same lines, years ago, I picked up my car from the auto repair shop. It was during mild winter conditions with lots of slush, blinding sunlight with messy driving conditions. I was on a major expressway where it quickly became apparent that the repair shop had failed to replace certain fluids, including window washer antifreeze. I was blinded and it was frightening.

I later had a few words with those guys. Point here is -- it may not be your fault, but you could be seriously hurt -- be careful.

Wisereyes: A couple of years ago in northern Nevada, I was given a rental with temporary tags and no license plates. Upon closer inspection, I realized that the temporary tags were set to expire two or three days before my rental would have been completed. Not only did some car rental employees drop the ball, they also put me at risk of a cash forfeiture.

Needless to say, I insisted on a different car with an upgrade for the inconvenience. I had loaded and unloaded my bags and had to find an agent who could fix the error and get me into a different car.

Gustav Shoe: Just recently, I was pulled over driving a rental car with out-of-state plates that had expired tags.The officer verified that it was a rental and then said the car’s registration was current, it just didn't have the tags. Fortunately, he simply let me go.

Chip P: When picking a rental car out of a row, if I have a choice of several, I'll avoid anything too new or with out-of-state plates I don't waste too much energy on selection, but I learned the hard way to double-check absolutely everything important when getting a rental car.

Whatheckle: Bear, are you going to start renting cars just for kicks to see if it happens again? How is it that people that view variance as a condition of advantage play get excited about it in other avenues of life?