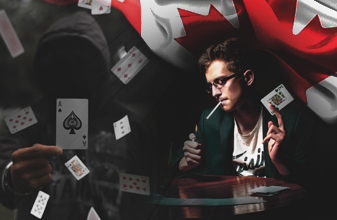 To anyone thinking of hopping a plane and checking out blackjack in the great white Canadian northlands of Alberta, the good times have ended -- there really isn't much opportunity anymore.

I’ve now been chased out of Canada pretty much completely, but not before I was able to develop a good bankroll and skills that will help me play more in the United States.

I lasted eight years playing under the tolerance levels of the local casinos while somehow generating good EV. In Alberta until a few years ago, though many table maxes were only $200, it was four decks with great penetration and early surrender. Most of those games are now long gone.

With heads up or at worst a not-full table, EV of over $200 an hour was possible at low stakes. I’m not saying how many hours a year I was able to play, but perhaps it’s more than you might think. I would just hide from other advantage players (I mean literally, for years when I'd see a fellow card counter, I would immediately bolt away from the table and just leave the casino. I lasted this way, pretty much backoff free, for five years in Alberta as the casinos really didn't care about me. I'm sure they thought I was making around minimum wage or so. It was an open secret -- at my most played casino, I was referred to as "Jack the Counter." Some of the younger dealers would congratulate me on taking the casino's money while dealing me a half-deck pen or even better, and one pit boss would even refer to me as "a good friend of the casino." It was really nice to just count in the open without heat or cover.

A few years ago, most of the casinos revamped their high limit rooms and put in $1000 maxes, which was my eventual doom. Casinos simply can't offer a heat-free, great pen, high-limit game without that game eventually being blown out of the water.

It didn't take long for me to get tossed out like everybody else, even though I erroneously thought I would be spared as I still played the low-stakes tables by conscious choice to avoid heat.

One summer, a nameless (unless he or she cares to divulge), highly skilled and well-bankrolled player came in and was able to take six figures in less than a month, while a team also came in and feasted as well. Good for you guys -- good luck out there, and I'm glad you were able to take the casinos’ money. It got to the point where there would be far more counters in high limit than regular customers; I estimate at least seven figures in damage to the casinos; probably multiple millions in damage. The casinos simply had to wake up to the fact that card counting exists, and they weren't happy about it.

So now Canada is mostly a paranoid wasteland where they back off or bar first and ask questions later. A bet spread in the high limit room will earn you reduced penetration on your first day, and a half-shoe on the second day or even sooner.

This assessment really only belongs to high limit. If a counter wants to come in with a top bet of less than $300 and play low limit six-deck games with the now-reduced (but sometimes still relatively good) pen, as correctly described in Current Blackjack News, then I think you could last a bit -- generally not as good as in the States, but certainly worth it to the hobbyist who is in town anyway. But about half the casinos now sweat any bet spread whatsoever, so it will have to be trial and error on which casinos to play.