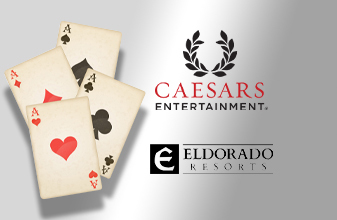 The coronavirus outbreak has delayed the multi-billion deal between casino companies Caesars Entertainment and Eldorado Resorts, but the deal is moving forward, according to a CNBC source with firsthand knowledge. Following a report on CNBC, Caesars was halted on the news and reopened up 12%.

This merger will likely be bad for card counters and other advantage players. There is near-universal agreement in the advantage-player community that large corporate casino mergers are harmful to customers in general, and even more so to AP’s.

Indiana, New Jersey and Nevada regulators still need to sign off on the deal but have postponed hearings due to the pandemic. The merger also needs the approval of the Federal Trade Commission.

“The board is still investigating,” said Nevada Gaming Commission Chair Tony Alamo. “The merger is going like any other merger. It’s just going through the process, which includes a normal investigation.”

Eldorado and Caesars had anticipated closing in mid-April, but multiple sources have said it now looks more like June. There has been widespread speculation that the pandemic will change the ways regulators view the debt associated with this deal. A highly-placed source says both companies have the liquidity to last for well over a year.

Caesars has $3 billion on its balance sheet and recently sold the Rio in Las Vegas for $460 million. That was an unexpected source of cash and was not factored into the deal. Assuming a planned $230 million asset sale of two casinos in Mississippi and Missouri to Twin River closes, Eldorado will have roughly $850 million on hand, a source said.

In the meantime, Eldorado is paying a daily ticking fee of $2.3 million, which accrues and is paid to Caesars shareholders upon closing. A late June closing date means the ticking fee would raise the price tag from $17.3 billion to $17.5 billion — seen by insiders as insignificant considering the size of the deal and the advantages to both companies.

Firm financing commitment is in place — procured from 11 banks — at attractive rates. Both Caesars and Eldorado have spoken about their intention to close the deal as is, because any changes now would mean a new shareholder vote and a new effort at financing.

The highly placed source says, “The deal was constructed with a balance sheet to survive a crisis, with ample liquidity and no debt maturities until 2024.” And the payroll tax benefit in the federal relief package could boost the cash flow of the combined company by hundreds of millions of dollars.

Amid the nationwide shutdowns, Eldorado has committed to paying its employees through April 10. Caesars has admitted to laying off many, though it hasn’t publicly shared specific numbers. The Reno Gazette-Journal reports that 3,200 Caesars employees at various Las Vegas properties were laid off just before Nevada’s governor Steve Sisolak ordered casinos to close, according to a letter filed with a state agency.

But an important factor is how long casinos stay closed and how quickly business is able to ramp up after reopening. For regional markets, where most customers drive to the local casino, the hope is that casinos will see the same pickup that bars and restaurants do — that pent-up demand will lead Americans out to social gathering places. But there’s an admission that Las Vegas might take longer if there are lingering concerns about exposure to the virus on airplanes.

It’s something that concerns the Nevada Gaming Commission chair, who is also the chief medical director of a large clinical delivery organization. “The gaming industry won’t turn back on like a faucet with water,” Alamo said. “Once they open, it will be the economic drivers and the psychology of this country that’s going to restart the gaming industry, and that timeline nobody knows.”

If not linked, anybody who has been busted at one of those Caesars could play at the other corporation before the players card merger is complete.