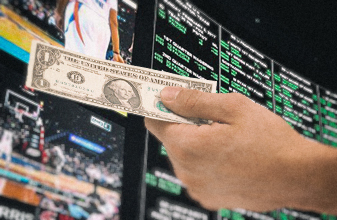 On most games, baseball does not use football-type point spreads. On baseball you bet money lines and totals.

In the event of pitcher(s) change prior to the start of a baseball game, money odds may be adjusted. If one scheduled pitcher starts against an unscheduled pitcher, “action” and live “one specified pitcher” wagers will be computed at the opening price established with the new pitcher.

So if you bet baseball and your team loses, check to be sure who were the starting pitchers before writing off your ticket as worthless.

You can bet on which teams are going to be league champions, and which is going to win the World Series.

Basketball also has money lines; they are listed to the right of the spreads and totals.

You can bet on which team is going to be the NBA Champion.

On most games, ice hockey does not use spreads. You can bet the money line, and you can bet the total. If one team is a big favorite, then the sportsbook might offer a puck line, for which the explanation is the same as for baseball’s run line above.

Hockey totals use the same o/u system as does baseball.

Excerpted with permission from Sharp Sports Betting by Stanford Wong.