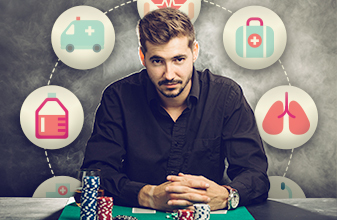 How do the people who are full-time advantage players manage their health in general? I would think all the travel would be difficult, as it is never easy to be away from family and friends for extended periods of time. Also, the pure volume of casino smoke in places without a smoking ban makes it difficult. When I'm in smoky casinos for a few days, I tend the feel the effects for days after the exposure. In addition, I would think it is hard to eat well, get proper sleep and find a way to exercise enough when always on the road. I've seen over the years some posts about AP health but wanted to get thoughts from others on this topic.

Seattle Player: It's very tough but you can be committed to a healthy lifestyle. I work out every day before I play. After being in poker for a decade and branching out into other advantage play, I’ve observed that many in our profession are in bad shape. I've got some really strict rules that I follow which might help:

bigplayer: I no longer travel as much as I used to. The days of rolling up big comps via blackjack play are pretty much done. Absent the comps, much of the unhealthy lifestyle choices are no longer available.

The worst health issues for me involved frequent travel by car -- ten hours driving was not good on the blood system, thus compression socks were a must. Road food was also not healthy much of the time. Once I got to a location, I tended to stay frequently at mid-range hotels; most of them have a fitness center. I used to use their treadmills quite a bit.

When at home, an AP is really not much different than anyone else working an office job, minus the human contact. I mostly liked traveling and was often on the road for several weeks at a time. That's why I have cats, so I don't have to interact much with people.

Scrooge Mcduck: When I moved to Las Vegas, I got sick almost continuously for the first six months. Then I went back to playing mostly online, and stopped getting sick. Unless I hit some bad variance, each hour spent in a casino seems to bring at least a 2% chance of getting sick.

I very rarely got sick in the years before I moved, and that was in Los Angeles eating out at least ten times a week. What do you do to avoid getting sick in casinos?

KewlJ: I am still young-ish (mid 30's). I am fit, exercise somewhat regularly, active and try to eat fairly healthy. I do have some concerns about the AP lifestyle.

After playing several years in Atlantic City with Las Vegas trips mixed in, I decided that I didn't want a life of always traveling and hundreds of nights a year in hotel rooms. So I made the decision and tailored a plan and plan of attack that would allow me to minimize travel, and sleep in my own bed almost every night. It involved relocating to Las Vegas to have a larger local rotation of games. It was the best decision I have made involving my AP career. I think my life is as close to a "normal" life as any AP that I have read about or communicate with. I’ve been able to minimize air travel that I generally dislike.

My primary remaining concern is the smoke-filled environment that card counters and other AP’s work in. I haven't figured out a way to eliminate that concern, though I think my general style of short sessions and moving around a lot is probably beneficial to some degree.

21forme: Chips are filthy. If you ever played Trump Plaza, you'd know that, as it became hard to tell red chips from black chips because they were so dirty. :-)

Wash your hands frequently. Carry pocket-sized Purell. Keep your hands away from your face while at the casino. When in Las Vegas, I walk the Strip for the exercise. The rental car doesn't move unless I'm going off-Strip.

JNote: Running is a great form of exercise, and it can be done in most locations while traveling, be it urban, suburban, or rural. If weather or other conditions make running outside difficult or undesirable, most hotels have a fitness center with a treadmill. During trips, I try to fit in my running on a regular schedule (usually mornings), but of course, sometimes I need to fit it in when I can.

Rattler1: I used to get sick in casinos often, but rarely do anymore. These things are pretty basic, but they work:

TMJdoc: Keeping your hands away from your face during and after handling chips and money is a good idea. More specifically, keep your hands away from the apertures of your face (eyes, nose, mouth) because contact with unwanted microorganisms to the tissues there can result in transmission of disease. Your external skin (without any openings) is a good barrier. Wash your hands thoroughly after each session or even more often.

Dealing with smoke is always a problem. I asked a pulmonologist friend about the casino environment and he gave a typical physician answer -- "Don't go there." Of course, that’s impossible advice for an AP. He discussed certain masks (N95 or P100 type) that are effective but conspicuous. There are nasal filters on the market that probably are better than nothing.