Traveling away from Las Vegas 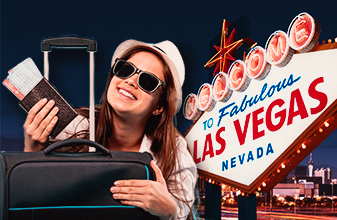 Split Face Disaster: I started card counting full time a while back. I live in Las Vegas, but now I`m considering traveling away from Las Vegas about once a month for about 4-5 days in order to boost my EV. It's not easy getting hours in Las Vegas for various reasons, and you’re capped on what you can bet/get away with too, which is why I’m thinking of doing this. If I could, I would just travel full time, but that's not a possibility for at least a year or two.

If I traveled and concentrated on playing casinos that aren’t database participants and also aren't part of the two big chains in Las Vegas (MGM and Caesars):

a. How many states would I have to go away from Nevada to make sure flyers don’t get as far as Las Vegas (so I can continue to play locally)?

b. How would flyers affect me in terms of them getting in the hands of places that do database (meaning I’m thinking I’d get databased through flyers anyway, even if I didn’t actually go to casinos that use databases)?

c. Would I get even get in 30-40 hours in before getting flyered in most of the major gambling areas that I would hit (bet spread would be somewhere a little under 2x400)? Not that getting databased is the end of the world, but since I`m not in yet it makes sense to try to avoid it for as long as I can. Part of me thinks there’s a really good chance that eventually traveling to play will affect me playing in Las Vegas no matter how I go about it. But I could be wrong. Any insight into this would really help me out.

Of course, I try to avoid showing ID if at all possible in any situation, most especially when it’s heat related, as in to refusing ID when a casino employee asks to see it -- and I don’t play rated.

Las Vegas is tough. Any time I’ve been told I can’t play unless I show ID, I just leave and cash out later. I don’t pay attention to them when they tell me I can’t cash my chips unless I provide identification. I never accept anything above $500 denomination chips. I try to keep it to mostly black chips if I can. That’s obviously a little more difficult when you’re betting $500/hand or more, but still doable. Plenty of times I’ve left the table while stuffing a handful of blacks in my pockets.

Las Vegas is tough for counting cards. You won’t get hassled nearly as much in other parts of the country. But no matter where you are, just be firm. The only time I’ve ever given up ID when playing unrated is if I CTR, or if I’m being 86’d and have a ton of chips to cash and have no desire to go back to that region for a while. Even if they hassle me at the cage, I’ll usually stand there and argue with them until they give in and cash me out. Most casinos start pestering you for ID/player’s card once you cash out anything more than 2K to 3K at once. I’ve had numerous occasions where I’ve had to argue with cage to cash out larger amounts (more than 3K/less than 10K) without showing ID. If you stand your ground, they’ll eventually give in most of the time.

Ikthor: When they hassle you, they are nervous, don't want your action or you tripped some internal trigger (winning too much, buying in for too much money, or a pit boss just wants to see if you blink, whatever).

Just leave. Better than making a stink and becoming more easy to remember, though either is better than giving up ID. Never give up your ID -- certainly not if you want to play a few hundred hours a year and be somewhat serious about it.

Don't take anything > $500 chip. They often trigger mandatory ID checks. Don't even take the purples at a dumpy local place.

Keep cash out's to <3k at better places and < 2k at dumps/local places.

Don't get in more than 3k cash at a place -- if you do, just walk to the next joint/session.

Las Vegas is beatable with the above at higher stakes, but it's sweaty. However, it's no more sweaty than throwing black around unrated in a riverboat town. And there's a lot more action in Las Vegas to blend in with.

By and large you can avoid all issues and radar with the above. It's easy to do in Las Vegas due to the existence of so many casinos. It’s harder in riverboat towns with fewer places/tables/pits to play.

Do whatever you have to do to avoid giving up ID, even if it inconveniences you. Period.