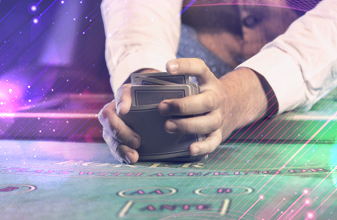 Skillful blackjack players are often able to find multiple ways to gain the edge over a casino. Card counting is one such way, hole carding is another. This article touches on the intricacies of a third way -- exploiting the shuffle.

One way to get an edge is to follow individual cards or groups of cards through the shuffle. But most casino shuffles are so complicated that attempting this is a waste of time.

Shuffles are standardized within a casino; whatever shuffle you witness on one table will likely be repeated on other tables that use the same number of decks.

Occasionally you find a casino in which the dealers use an incomplete shuffle. That is, some shuffles involve breaking the pack into deck-size groups and shuffling those groups two at a time, but otherwise not intermixing the groups. If you count cards, you might be able to have a count for each of several different groups of cards, follow those groups through the shuffle, and cut an excess of aces and 10s to the top.

New Decks Shuffled, But Not Together

Something to watch for if you start a game at a table with unshuffled cards: See if the dealer mixes all the decks together. Sometimes each deck will be shuffled individually, and then the decks will be slapped together (but not shuffled together) and given to you for a cut.

In one story from the trenches told by a reader, a dealer in San Diego was standing at the table. In front of him were spread six decks. They obviously were used cards, but they had been sorted and arranged to resemble new decks. Then a customer came. The dealer shuffled each deck individually, but the individual decks were not shuffled with each other. Thus the shoe contained six single decks, stacked one on top of the other.

To a basic-strategy player, it makes little difference whether a shoe contains single decks stacked one on top of the other or intermixed decks except that the casino’s edge is about half a percent smaller with the single decks. But to a card counter the difference is major. A running count of +4 in a single-deck game calls for a big bet, whereas a running count of +4 early in a six-deck game is still in the ho-hum range.

There are other methods of exploiting shuffles, and good books available that discuss these methods in more detail. My goal is to pique your curiosity to further explore this method of advantage play. Good hunting!

This is the last of a series of articles that were excerpted with permission from the e-book version of Professional Blackjack by Stanford Wong, edited for this format.