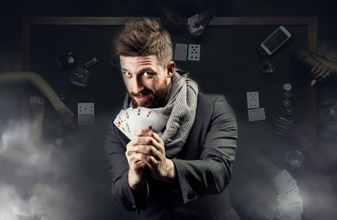 I have been working with a good friend over the last year, trying to convert him from a ploppy recreational and not even very good basic strategy player into at least break even/slightly positive EV player. The bar is pretty low because he is a red chip player, playing many inferior games, and is unwilling to hit and run as much as I would like, but breaking even with some comps is better than losing money.

The Tahoe Scout: When people express interest I tell them, go learn basic strategy, and when you know it perfectly come back. Only a few at some point tell me they have learned basic strategy, and I ask them, "what do you do with 13 vs. 2?" Usually within two or three questions, it is clear they don't know it, and I tell them to come back when they do. I don't think I've had anyone get past that point.

Most people that are ploppies and interested in winning at blackjack are dreamers thinking about easy money. I have had the opportunity to teach winning blackjack to many people. Only a handful have come forward as winning players. Most do not put forth the effort required to learn how to win. Starting with basic strategy, most ploppies do not even get past that. If one truly desires to win then the student will learn as much on his own and only seek guidance. The friend or student has to have desire, drive and discipline to learn, win and to be teachable.

Friendo: "If one truly desires to win then the student will learn as much on his own and only seek guidance."

There's a certain fire which is not tied to making money. At their core, gamblers are driven by forces completely divorced from an interest in the essence of the game. They're out to stimulate some sort of receptors in their brains which are tied to risk-taking and reward, or a sense of destiny and their ability to control it.

Years ago, I picked up Stanford Wong's Professional Blackjack out of curiosity -- I had never played blackjack. I read it, but didn't think much about the game for a few years. Then played for a few hours as a ploppy, betting $5-$10 for a few hours while passing through Las Vegas. Then I moved to a city near some casinos. Re-read the book, bought 3-4 other books -- at this point, my casino experience was still limited to that Las Vegas stopover.

Practice, practice, practice -- weirdly soothing. Many evenings spent with Casino Verite. I felt no urgency to actually play -- I was really interested in the game itself. The questions which particularly interested me were why certain index/strategy plays were about pressing an opportunity, while others were about mitigating a poor hand, and other such questions. I also had plenty of appetite for learning about counts which I had intention of using. The game was intrinsically interesting.

First casino trip was at the urging of my wife, who was climbing the walls watching me practice like some obsessive building a model of the mountain instead of hiking up it. Looking back, I am amazed at how my absorption in the game was so disconnected from playing it.

Finally started playing for real. Only had trouble for the first three or four hours of live play. Starting at tiny stakes, the first time I made a sequence of $100 bets at a good count, my heart was pounding; not from a desire to win, nor a belief that I necessarily would get the better of that sequence of bets, but from the delight of practicing my religion, which is science. Mathematics says that these bets are the right thing to do, so I make them. It was among the first truly entrepreneurial acts of my life.

Looking back, I don't remember any desire to play for fun, or luck. It's a peculiar fire -- I have little interest in the outcome of a play, and not much memory of great or terrible hands. I'm interested only in watching the slow, creeping triumph of expectation over standard deviation, hour after hour, and the continuing demonstration of the absolute uselessness of real-time empirical evidence in this game: every A7 v 10 gets hit, and I marvel at how futile that play seems, though I trust the combinatorial results absolutely.

I have no understanding of why the regular gamblers even sit down to play; nor would they understand me. We are fundamentally different species. They would not understand my language, because I'm there to worship mathematics, while they're there to play a hunch as to the next card, or get the rush of a spectacular positive variance.

The idea of converting a recreational gambler, someone with no reverence for mathematics, seems fundamentally futile. They have no motivation to learn the game, because they have no interest in it. They want action. We want to know the nature of the shoe, what the remaining cards tell us, and the precise strength of that information in terms of N0 and risk. Our interests simply do not intersect with theirs.