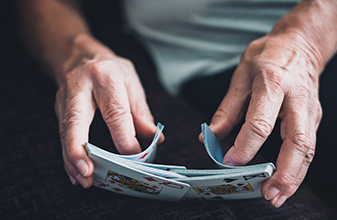 My first hole carding experience was several years ago, but I remember it well. Details have been omitted from this article -- the purpose is not to expose any particular game or location, but to generally describe the presence of hole carding opportunities, my awakening to such opportunities, and the feelings one might experience upon having this new and exciting advantage play opportunity suddenly open up to him.

It had been about a year since I’d made a definitive plan to make hole carding a topic of study in my continuing AP education, and I’d had little luck. When you don’t know what to look for, it’s hard to find.

I don’t know how hole carding AP’s learned to do it, in general. I imagine some are shown how by more-experienced AP’s who have brought them into their team-play fold. I imagine some discover it for themselves. Mostly I have to imagine. For a year, I scoured the internet, found a few blog posts and articles on it, heard about it on podcasts, but never did I see or hear it described in detail. Hole carding began to seem like some mythical event, told in stories around the AP campfire, but no more tangible than the smoke.

And then one day it happened. I was on a business trip, driving several hours to my destination, and doing my usual thing of hitting most or all of the casinos on the way, for an hour or less. I got to my destination and settled in for the night. I’d be there for several days before the drive home, and would have the opportunity to frequently visit the only casino in the vicinity, a tiny little store in this middle-of-nowhere place.

I’d checked CBJN for the blackjack rules and penetration. Six-deck, hit seventeen, penetration varying by dealer but never better than 1.5 decks cut, and usually a bit over 2. Lousy! The only saving grace was a generally clueless pit crew. With a big enough bet spread and the right dealer, it could conceivably be played profitably, and the pit crew seemed oblivious enough to make a giant spread feasible for at least a little while … but even still, it just wasn’t much of a viable play. Not for pure card counting, anyway.

No big deal for me though, since I can always just play poker. This place may be a slot-machine infested dump with pathetic video poker pay tables and crappy blackjack rules, but it has a surprisingly nice poker room. Teensy by poker room standards, but clean, well-run, and constantly full of fish from 11am to well after midnight. So I put my name on the poker waitlist, and took a seat. I got bored quickly, and decided to go downstairs and thought, “What the heck, how about some blackjack?”

I found a blackjack table and plopped down (appropriate term, since the rules were so bad I might as well be a ploppy), and decided to play the low-stakes minimum just for laughs, unless the count became really good, in which case I’d throw out some black chips for as long as it stayed good. “Heck,” I thought, “I’ll probably get called up to the poker room before long anyway.”

I sat there at first base and noticed the guy at third base stand on 12, against a dealer 9. Huh? Dealer promptly flipped over a 6, and then busted with a face card. I became … VERY studious!

Over the rest of the shoe, the guy made three other plays against basic strategy, two of which won, and all of which made sense only under the assumption that he had seen the dealer’s hole card! My head was on a swivel. Surely this couldn’t go on for long without drawing pit attention … but no! Pit wasn’t watching, nor did they seem to be pretending to ignore the table in the way they do when the eye in the sky is monitoring it. Oblivious. This guy, a regular from what I gathered, was obviously hole carding and getting away with it, probably because the play of the average patron at this store is so bad, that plays like standing on 12 against a 9 don’t stand out.

Suddenly this dump seemed a lot more playable. I memorized the face and name of the dealer, and made a note of her hand and arm motions. I hadn’t noticed before, due to inexperience, no doubt, but I began to surmise it might in fact be possible to catch a glimpse.

I remember feeling more alert in these moments than I had felt in a long time. Adrenaline!

And then my name was called over the PA system, so I colored up and headed off to the poker room, unexpectedly educated.

The next day I showed up early, at the beginning of this dealer’s shift. Had to wait a couple of rotations before she got off carnival games and was set up at a blackjack table.

I played for a few hours, following her to other tables, and through a few bad counts and a few really good counts, I made several hundred dollars playing at low stakes while practicing. But most importantly – I learned how to hole card! Or at least got a little experience. I’m sure there are still quite a few more things for me to learn, and opportunities I still need to learn to look out for. But my education had begun, and it felt good!

If that hole carder who unknowingly opened this world to me is reading – thank you!