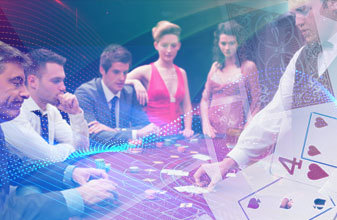 If you took a year or two off to play blackjack (let’s just say strictly card counting) and then came back to the “normal” workforce, would you list it on your resume? I've briefly thought about what I would do in this situation, and haven't really come up with an answer. I’d be interested in hearing other people's opinions.

Sammy Boy: With the right person it could be an attention getter that gets you an interview. With the wrong person it would get you immediately disqualified. There was a time when I never would have put it on my résumé. I've changed my mind a bit and if I ever wanted another job there is a good chance I would include it unless I thought it would be a big negative with the group looking to hire me.

Captain Jack: I would not put it in my resume, but I would also not shy away from accounting for it if it came up in an interview, and based on my hiring practices, it would definitely come up. At that point I would explain that I was self-employed and leveraged my skills to exploit casino inefficiencies much the same way an investor might exploit inefficiency in financial markets. I would also explain the work ethic I learned while being self-employed as well as the value I place on being in a stable employee/employer relationship. When the inevitable question comes as to why I'm returning to the workforce, I've laid enough plausible reasoning that markets become more efficient and I desire more stability. As an aside, I would have never gone full-time pro in order to strictly count cards. So my answers should take that into consideration.

A.Counting: As for getting on your CV to come up in conversation, there could be several ways of doing this to pique someone's interest, but I also agree that it would depend on the job, as well as the person. If you ran a blackjack team, you could put on your CV that you managed a "fund" which had an average return of X percent.

I would definitely have a packet ready of a summary of your results, etc. if you were planning on really leveraging off of your card counting or any other advantage play experience.

Flyboy: I would leave it off. Advantage play is just not understood, even by people who are otherwise intelligent. Attempting to explain "exploiting casino inefficiencies" just sounds like so much jargon. Documentation won't get you far. Worse, you run the risk of being pegged as a potential problem by the Human Resources department because under most hiring rules, compulsive gambling is considered an illness and you can't be fired for it. So HR, simply to avoid perceived legal landmines, will recommend not hiring you. Add to that the skepticism of any other person who must sign off on your hire.

Ikthor: Your average person is not going to glorify gambling as a lifestyle. In fact, an employer is more likely to think you are a risk and that they are hiring someone with a built in "problem.” If the job is in any way sensitive or deals with money or major trust/responsibility, I don't think you’ll make it in the door for an interview, most of the time.

You're actually best advised to not really tell anyone you play full-time apart from immediate family and a couple of friends. Most people don't get it and you cannot explain enough to overcome the associated stigma.

Don Schlesinger: It depends on the industry. On Wall Street, you'd be treated like a god! If there is any industry on earth that understands exploiting market inefficiencies, it's Wall Street.

Explaining my knowledge of blackjack and card counting to the five people who interviewed me for my job at Morgan Stanley contributed more to my hiring than my knowledge of options.

Pig Barber: Wonderful comment by Don S. but, as Don S. said, in the hedge fund or trading industry in general, most are aware of some big names like Bill Gross and Ed Thorp, and we might now say Don Schlesinger --- all who not only understand blackjack advantage play, but have been actual practitioners themselves.

On the other hand, many employers might look at it as the general public does, that you were a degenerate gambler (to many of them, a step below having been in prison) for those years on your resume. To them, no matter how much you can explain the math or articulate the history of such famous people, such employers have zero context to understand and they might hear only "degenerate gambler.”

Darco77: It also depends on the individuals doing the hiring. In general, I agree that you'll have a better chance of being recognized on Wall Street than in most other industries. However, looking back at my previous two places of employment -- asset managers dealing in hedge funds, mutual funds, and private funds -- the views on AP have been quite varied. Some were fascinated with it. Others acknowledged its legitimacy, but viewed it as bush league. A few were naive, not really understanding it at all. And a couple found AP to be complete rubbish -- the delusions of reckless gamblers suffering from selective memory.

Strangely enough, one of those that fell in the "complete rubbish" camp was the CIO, who guided and oversaw the shift of the mutual funds from a fundamental analysis approach to a high-turnover quantitative strategy. In his mind, math works in the markets, but not in the casinos.

KayC1111: I am almost certain that I would put advantage play on my resume -- maybe even without any gap in regular employment history to account for. The only limiting factor would be, perhaps, the corporate culture of the individual companies I was applying to. Of course, there's no way to know beforehand how the interviewer will personally receive such information, but you could make some educated guesses based on industry, company demographics, geography, what you read on work life review sites such as glassdoor.com, etc. There are definitely applications where your gut might tell you it's not such a good idea to include AP.

How to phrase it on the resume is the next challenge. Depending on what you include on the rest of your resume and how many different facets of AP you've explored, you might have just two lines to work with, or an amount of space equivalent to the rest of your job experience. Absolutely play up the mathematical aspect of it, and mention the transferable skills. It's really no different than describing any other job you've had.

The interview is really where you'll shine. Passion is something that is so sorely lacking in many interviewees, and advantage play is an intriguing subject that truly lends itself to such expression. Speaking with genuine enthusiasm about your experience with AP, what you've learned and taken away from it, will portray you as well-rounded, open-minded, creative, and just the sort of person they want to work with. It’s also a great medium to discuss your knowledge about that math behind it, and how you actively applied it concurrent with myriad other "soft" skills. AP is such a unique pursuit, it will surely set you apart from the other candidates. Speak confidently and intelligently about your involvement and I feel most interviewers would be quite receptive.

bigplayer: I would leave it off. Hardly anyone believes this is possible. They will only think you are an untrustworthy degenerate or worse, somehow a criminal or cheat. Investment management is about the only area where advantage play has a chance of being recognized for what it is.