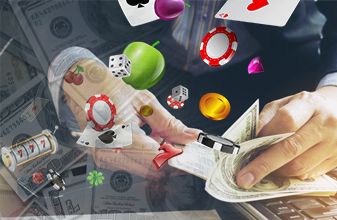 Tipping by advantage players has been discussed before. Here are more thoughts on this topic.

Bob Milo: It would be interesting to see a study on tipping’s effect on bankroll growth. I would think this is a good reason for keeping tips to a minimum. When you're trying to build your bankroll, those tips add up (as a % of profit).

Anybody have some solid “tips” for when tipping is appropriate:

You hear poker players talk about this. Really can't win re: tips. If you tip $2 or even $5 after a big winning session, the dealer may scoff at you and consider you cheap. I think my new goal is to dramatically limit my tips. I used to match the tip on double downs - too expensive, don't think I will anymore.

Green: To measure the value of tipping:

Now, your reasoning is logical and correct in that you do encounter situations where the payoff from 2) exceeds that of 1), but when you factor in 3) it is almost always negative.

Perhaps if you cultivate a specific relationship with a dealer and get to know their behaviors, you can induce a benefit with enough certainty that you can ignore 3). Even then, it isn't an entirely sure thing as your relationship can suddenly deteriorate when the dealer starts getting heat from the pit critter.

Zerg: If you are used to tipping, this is something you have to learn from experience. Before I started counting cards, I played some poker at a smaller place. I was a young man that wanted to be friendly and well liked. The dealers would always talk about bad tippers. They had me coached pretty well and would get a dollar most hands I won. Because of that, I was well liked. Started recreational-playing some table games, and wanted to tip appropriately there as well. Again, the dealers coached me well.

When I learned to count blackjack, these tipping habits continued. I had a pretty good run when I built my first bankroll. I didn't really think about or notice the effect of tipping. As my stakes increased, my tips increased, though not as much. I started to get some pretty rude comments. The first one I remember was when I was coloring up my biggest-ever win at the time, about $3000. I tipped $7.50 and got a sarcastic "thank you sooo much." I was embarrassed, and thought she was right. I should have tipped her a green chip.

So for a while, I did my best to tip an amount that would keep dealers happy. There are many things you can tell yourself to justify your continued tipping. I had myself convinced with a pretty good list. My thoughts at this time were along these lines: The dealers make less than I do. They deserve it. If you have the money to play, you have the money to tip. It is part of the game. Tipping provides cover. It doesn't look right if I don't tip enough. How can I pretend to be carefree with money to burn and not tip? They won't like me if I don't tip.

Then I had my first big downturn and started estimating how much I had tipped away. I came up with $7000! Ridiculous -- my winnings/bankroll at that time were only in the 40k range. I'd say that is a pretty big effect.

But that isn't even the reason I quit tipping. Life isn't all about money. I do get something out of a properly received tip. I get good feelings, which is worth something. This line of work would be genuinely more pleasant if tips were properly received. Also worth something. If dealers were always friendly, thanked me, and seemed to appreciate the tips. I may very well have gone on tipping 10% of my EV. I quit because this isn't even close to the case. Dealers have continued to coach me. I now know what they expect. They are not worth this amount! I know what happens when I tip less than they expect: General dissatisfaction. And not always, but often enough, a rude comment. And I know what happens when I stiff them. An appropriate reaction. You don't like me, and I don't like you. Hopefully we will both be polite about it and go on about our business. This is the best we can do, and is acceptable to me now.

Barry: There seems to be a lack of mental toughness in having to please dealers via the tip route. We must learn to have mental toughness when the tip hustling starts. I often smile to myself when other players tell me to toke, dealers mentioning how good I am to you, etc, etc. My response......NO RESPONSE, we must be totally focused on getting the cash, not false accolades from a dealer's thank you. Furthermore, have you often thought that a dealer thinks you have tipped “enough” after a large win? Absolutely not! Now, if penetration increased substantially contrary to house policy, that's a different issue, but still not warranting the over-tipping they expect. In reference to dealers making less than others -- that's their choice. Are they sleeping irregular hours like successful AP's, travelling long distances to earn a decent wage, etc, I think not. Are they stretching beyond one's comfort zone to achieve exceptional fruits for their labor as us, NO. Try placing a toke on a high-count handheld game early in the shuffle as the relief dealer approaches… "let's play till we lose one." Nope -- I still find them usually taking their break by spreading the cards, not dealing that extra hand. Laziness shouldn’t be rewarded.

Sometimes during a lengthy road trip, one needs conversation -- call a friend, have coffee, but keep personal conversations with dealers to a minimum. During my frequent circle route of venues I work, dealers, not meaning any harm, often inquire, “where are you from?” If she is attractive, I kiddingly respond, “why, what you have in mind?'' or “just down the road.” That usually ends the interactions.

You have to have fun sometimes, or this business and the unhappy, unhealthy casino environment becomes depressingly dreary. When obvious tip hustlers appear, I take personal pride in playing dumb when winning. I use the ploy of a fellow AP's response after a win and getting the sarcastic comment,"you're very welcome" while leaving the table. I'll turn around and with a startled look will say, “I don't remember saying ‘thank you’” -- still acting perplexed, I offer my helpfulness. I'll slowly slide the chairs closer in towards the table. You can't take things too seriously in this unorthodox business. Have some fun once in a while.

Chip: Avoiding absolutes, I rarely tip when counting in any of the bigger money houses in major venues, especially if I'm just table surfing anonymously.

Much of my play in remote areas is in places where I'm well known, however; dealers keep their own and their reaction to my presence is actually important to my longevity. Happily, in these spots single dollar chips placed periodically seem to make them happy enough.

A few thoughts for when I do tip...

Bull Rider: An important point, raised above by Green:

"3) Now adjust your numbers downwards by the probability that the dealer ignores your tip or, and this can happen for a variety of reasons, actually tightens up. "

This is an important point, Mr. Green. Sometimes, the tip can actually cost you the extra round. Maybe the dealer knows the heat is on, and doesn't want to appear to be in collusion with the player, so the tip might cause the dealer to shuffle. That's why sometimes it's better to tip right after extraordinary penetration, rather than as an inducement to try to get it.

In most cases, however, the tip will increase the likelihood of getting the next round. In order to be effective, my number one rule is to use the tip to induce good dealers to deal better, not to try to induce marginal or unacceptable dealers to deal an average game. The expectation will be much higher, and often I don't even mind leaving the tip and bet out if I don't get a round I didn't expect to get. In the rare case where I tip the marginal dealer (e.g., to get an extra round with a monster count before a dealer change), if I don't get the round, the dealer doesn't get the tip.

My tipping behavior also changes depending on whether dealers keep their own tips or share them with co-workers. Sometimes, I have found creative ways to reward exceptional dealers with goodies that won't be shared with rude colleagues.

I do not tip dealers unless there is significant articulable gain in EV for me to do so.

I do tip food service people. They are not part of my business plan to make money in my chosen occupation.

Pre-AP mindset: I used to (gasp) over-tip a minimum of 20% post-tax amount (sometimes more) and leave with the feeling of,"damn, it's expensive to eat out."

Post-AP mindset: I tip food servers 15-20% of the pre-tax amount based on service. My one exception is when I have a meal with a hyper-inflated price at a fancy casino restaurant (i.e. a $300 meal that would cost about $100 in the real world). In these instances, I tip less than the standard 15-20%. I don't like the idea of a "comped meal" costing me $60. I also consider the fact that I have to eat out significantly more than the average person since I'm basically on the road all the time.

Chairman: It's about the symbiosis of the relationship -- restaurants provide a service and something of value, casinos provide nothing.

Dealers work for the house (never forget this); if players suddenly stopped tipping, you can bet the casinos would step in immediately to make up the difference to prevent their employees from leaving and thus not being able to operate. If restaurant patrons stopped tipping, the establishment would be forced out of business (they don't have the margins to make it up) and value would be lost for both the ownership and customers.