Ploppy gets involved in backoff 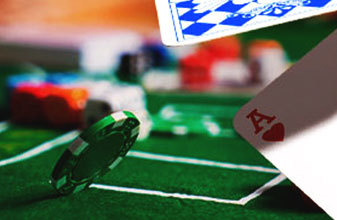 The deeply-dealt double deck being offered to the blackjack player was interrupted by the floorperson, who said, "Wait! You’re supposed to be dealing just a little over half the pack. Shuffle the cards." The player had been getting excellent penetration for about forty minutes. The player was also about to leave, since the session was getting too long, and a ploppy had just joined the table, ending the heads-up situation.

Playing dumb, the player, hoping to at least get that hand dealt, asked the floorperson, "Why, what difference does it make when she shuffles?" The floorperson rudely replied, "If you don't like it, you can go play somewhere else." The player, not sure if this was an attempt at a backoff (due to the snide comment by the suit), was going to play a few hands pretending that the change in penetration didn't bother him.

The ploppy (or maybe it was an advantage player sick of mistreatment by casino personnel -- the player had no way of knowing) became angry at the suit and piped up, "You shouldn't talk to customers that way." The player just wanted the ploppy to be quiet, so the situation would not escalate, but that's not what happened.

Hearing the ploppy, another suit quickly came up and said, "I'm the shift manager, what's the problem here?" The player said, "There's no problem, just a misunderstanding."

But the ploppy said, "There is a problem -- your employee was rude to this customer when he asked why this man (the floorperson) was interrupting the game." The ploppy was making a far bigger deal out of the whole exchange than was necessary; it didn't affect him, as he hadn't even played yet.

Then the ploppy asked, in a confrontational manner, essentially the same question the player had originally asked while trying to play dumb: "Why can't the dealer deal more cards between shuffles? This man had his money bet and this guy (referring to the floorperson) came over and started trouble."

By this time the player was cringing and wished the ploppy hadn't gotten involved. It would have been quietly resolved, and the game left for another day. The shift boss said to the ploppy, while scowling at the player, "She has to shuffle because we don't want lowlife card counters in here."

The ploppy became enraged, saying, "I'm not going to give my business to a place that treats people like this." He put his money back in his wallet and walked away, headed towards the exit. At this point, the player just wanted to get out of there, too. The player took his chips and, trying to salvage something out of the debacle, said, "I don't understand what this was all about; all I wanted to do was play a little blackjack. This whole hassle has spoiled the fun." The player left without cashing out.

The player still doesn't know if this was a badly-handled backoff or if the floorperson was just being a jerk by “correcting” the dealer in front of customers. The player doesn't know why the ploppy got involved, and probably never will know. It was startling incompetence and stupidity on the part of the two suits -- all they succeeded in doing was antagonizing the ploppy, driving him away. The player was not offended by their bad attitudes (being accustomed to such conduct by casino employees), but the ploppy was offended. So, as usual, casino paranoia caused them to shoot themselves in the foot. The player will be back, of course, but the ploppy may never come back.

Who knows, maybe the ploppy will badmouth the casino to others? Given the stupid way they handled the matter, it would be deserved. The player's plan, of course, is to avoid that store for awhile, and eventually come back.