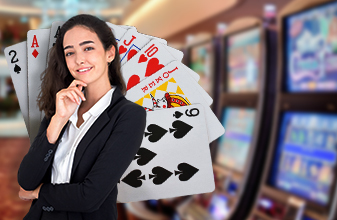 Does anyone prefer playing to female pit bosses and/or female dealers? I don't know what is in the genetics, but my finding is that nearly 100% of the time, a female pit boss isn't worried about bringing heat. They fill the chip trays and watch the inexperienced dealers to avoid errors. Heat is the last thing on their minds. Anybody echo these thoughts?

What about Bob?: No offense intended, Bob Milo, but your observation is incorrect. Gender has nothing to do with it. Last month, I was half-shoed by a female pit critter who was dealing on a shift that was short-handed. On that particular shift at that store, none of the male pit critters give me any heat whatsoever, but this woman and another, older female pit boss watched my game closely.

rockky176: If anything, it’s the opposite. Females are better in reading body language and vibes.

drumz1: Many times, a female critter is more likely to give a player heat than a male, due to a number of reasons, which include "climbing the corporate ladder" (many times, a female gets passed over for a promotion that was given to a male counterpart), or not having anything better to do than hawk the player(s) at the table, or just plain being in a bitchy mood (I have seen male critters who are identical in this aspect, as well).

There are other reasons, but I think most seasoned card counters are aware of them already. As far as I am concerned, it really doesn't matter. A pit critter is a pit critter, regardless of the gender, and should be considered an enemy of all advantage players.

Baloney Dog: Generally, I don't think they are any more or less likely to try to nail you than male pit bosses. If anything I think the female pit bosses (not necessarily assistants or dealers) seem to be more aggressive; maybe they have a chip on their shoulder about climbing the corporate ladder and such.

The Chaperone: I prefer my pit bosses to be really young or really old. Twenty-two year olds (seriously, take a look at some of the dumps in WA and the Midwest) generally don't care much about job security or much of anything in general. They also might still have some sense of ethics since they haven't been in the casino industry that long. They may think it is wrong that casinos back off skilled players, and choose to look the other way.

Old guys (and gals, but especially the guys) tend to be mailing it in. This is probably true of most seniors who have had non-challenging jobs their whole lives.

I agree with most here that gender doesn't matter in terms of heat from pit bosses. I have had some cases where a female boss in my age range might be somewhat swayed by a possible attraction to me (most likely because of all the money, but I'm not horrible looking :) ). But this usually wears off after my first few hours in the casino :)

Chairman: I vastly prefer female pit critters and dealers, and have always felt the most heat from over-forty-year-old males. I think both are correlated to their opinion of a potential card counter who is betting black at half their age.

doppelganger: Good observations, Bob Milo. Bryce Carlson noted a similar observation in Blackjack for Blood. Below is some of what he wrote. This has been my experience, as well.

Pit bosses have a number of responsibilities, and busting counters is just one of them. Equally important are the public relations and promotional aspects of the job. Because personalities differ, some bosses take these latter duties more seriously than others; your job is to find those bosses who are more interested in stroking you than poking you.

My own preference is for female and minority bosses. Because they often attain their positions through affirmative-action quota programs rather than through the usual good ol' boy network, they generally are not very well connected, and consequently, feel especially insecure in their jobs. Lacking a power base to operate from, the last thing they want to do is make waves. Mostly, they tend to keep their noses clean and make as many friends as possible. They are often very responsive, even grateful, for some friendly attention and positive reinforcement.

All this means that if you cultivate these folks properly you can buy yourself not only many hours of hassle-free play, but thousands of dollars worth of comps, as well.

Doctor BJ: I doubt very much that there is any difference at all between male and female pit bosses in terms of heat, surveillance of games etc. However, I have noticed that female dealers with well-manicured nails (or fake nails) do have a tendency to provide better penetration on their games. I began to notice this about 6 years ago when I actually observed a conversation between two lovely female dealers at a house in Atlantic City. They were comparing their manicures and one commented to the other that she tried to bury the yellow shuffle card farther so that she wouldn't have to shuffle as much and thus ruin her nails. The other gal responded that she thought that was a great idea. Sure enough, I later played at a table with the first gal and she was cutting out significantly less than the typical house cut.

Obviously, this does not apply across the board and I would not waste a lot of time looking for it, but over the years since then, I’ve noticed that pretty nails frequently equals better penetration. There is one particular house that I play in where this seems to apply even more than others, but I have no idea why, other than the fact that none of the dealers in this particular house seem constrained to use the guide slots on the side of the shoe.

Harry Tubman: It’s ridiculous to assume that females and minorities attained their positions through "affirmative action quota programs.” The decline of the good ol’ boy network is partially true; there are a few local athletes who were promoted, and females who have selectively slept with the right people, but they are the exceptions. But, the good ol’ boy network is alive and well, though less pervasive as more corporate rules exist and are enforced now.

The balance of the quotation is still somewhat true, but you will also see more "chips on shoulders" now, as well on females -- especially the unattractive ones, and other minorities, who can also make an impression by protecting the store.

Observe each situation individually, and increase your advantage.