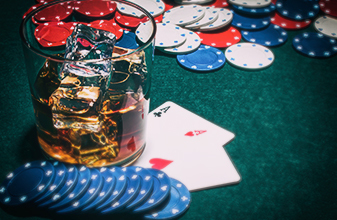 Anyone who has spent time in casinos has seen obviously drunk or otherwise incapacitated patrons being allowed to play. Though most jurisdictions have laws or regulations mandating that casnos refuse play from incapacitated patrons, there is rarely any enforcement action by the authorities. This is particularly true in Nevada, where the relationship between casinos and their purported regulators is far too cozy, making oversight essentially meaningless to the day-to-day casino operations, and in the attitudes of casino employees.

The first incident was during the wee hours at the "big baccarat" game ($100 minimum) in the high roller room of the Golden Nugget in downtown Las Vegas back when it was part of Steve Wynn’s empire. A late middle-aged Asian woman who was well known to the crew and wagering at least $500/hand was so exhausted that she would fall asleep during the action (big table baccarat can be a very slow game with a full table of superstitious players) -- the crew would wake her up periodically so she could place more wagers and she would doze back off before the hand was played out -- fortunately, the game is so mindless that she was almost breaking even with her "unconscious" wagers and was not losing much while I was there.

The second incident was during mid-afternoon at an uncrowded craps table at the Desert Inn in the mid-90's. An obviously drunk player at the end of the table who was making large "crazy crapper prop bets" like crazy kept asking the cocktail waitress for more drinks. In the DI's defense, the pit finally told him no more alcohol and nixed his orders with the waitress. The pit didn't ask or suggest that he quit playing until he sobered up, however, even after the drunken patron slowed down the action by starting an argument about having his drinks cut off and let loose a string of profanities directed at the crew, the casino, and whoever else was within range.

The third incident was at the dice tables at Harrah's before the company became so large. This one hit particularly hard because it involved a usually composed, conservative banker buddy of mine who was part of our regular Las Vegas group. I walked up to the table mid-morning to see him barely able to stand at the table. Turns out he had been up all night, had been playing at that table for many hours downing screwdrivers, hadn't eaten for hours, and the vodka had kicked in big time. He was seriously flirting with one of the female dealers (way out of sober character for him) who wasn't that young and wasn't that attractive. While I was trying to convince him to leave, the dice were passed to him (he was standing at the end of the table and not close to the stick). He placed a wager, picked up the dice, and was so inebriated that he threw them backwards over his shoulder and they landed on the table behind him (it was quite humorous, actually, especially when the stickman called out the "seven out" he had thrown and the shooter at that table started screaming "what the hell, I've still got the dice" (or words to that effect). Even then, my banker buddy wasn't asked to leave by the pit. I was finally able to get him to go to the coffee shop with me to down black coffee and a late breakfast. He fell asleep at the coffee shop table before his order arrived.

Each of these incidents further confirmed to me how despicable casino personnel can be and how they never hesitate to take advantage of their customers at any opportunity.

Meaningful enforcement and appropriate penalties meted out to the employees and the casino itself might be effective in curbing this abhorrent casino behavior. However, such enforcement rarely occurs.