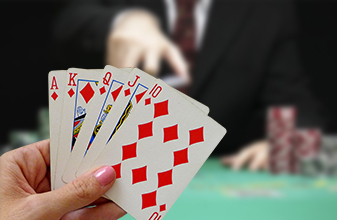 I recently took a blackjack trip to the Philadelphia / Atlantic City area. I found some good and bad while traveling, mainly bad outside of Philadelphia. My trip concluded not too long ago, so for now I will refrain from going into great detail. However, while at Bally’s in Atlantic City, something moderately strange occurred two days in a row. After the second day, I got the hint and did not return.

While backcounting an eight-deck game, a young man no older than mid 20’s came and stood right beside me as if he were trying to make me feel unconformable. He was about 3-5 feet away from me. I looked at him, he looked at me, and I continued to back count. Nothing going that shoe. I moved to another table -- same exact scenario, except this shoe hit the desired true count for me to wong in. I played maybe ten rounds before the true count dropped below the target area. I gathered up my chips as the dealer began the “can I color you up“ chant. As I stood up from the table, guess who’s there… yep, same guy that walked up next to me in the other pit a few minutes ago.

After I concluded play, I circled around the slot machines to see what he was going to do next, considering the fact that he was blatantly following me. I saw him walk into the pit and talk to the floor supervisor. As I walked towards bell service to see if he was going to follow me down the stairs, I decided to take another stroll back through to see if it’s just me or if he stands uncomfortably close to everyone. Walked to an area higher than where I last saw him and did not see him. I left and did not return that day.

Next day, very similar scenario, except as I am “playing all” at a heads-up table I looked up and guess who’s looking at me, eye to eye… the same guy! I played a few more rounds after noticing him, colored up and left the blackjack pit. I walked to the craps table and made an immediate wager before he disappeared again. I ask the dealer (only he heard it), “Who’s that guy right there? I come here a good bit but I’ve never seen him.” The craps dealer replied, “He’s a slot host” … At the time I pointed at him, he was still standing where I had last seen him, at this point he appeared to be just staring at the back of the dealer’s head where I was previously seated.

Why would a slot host follow me around Bally’s casino for two days? I very rarely play video poker; I don’t ever get much in slot play. My girlfriend used my player card to play several denominations of slot machines, but didn’t even lose $50 while she was throwing her money away, so there was no way I would have been considered a standout slot loser that deserved a hat, coat, or even a customized bottle of hand sanitizer. Point is, it was nowhere near enough to have a host hunting me down before I can go elsewhere to give back slot winnings.

I’ve been backed off, I’ve been hawked to the point that I’ve taken it as a light backoff and left to never return, I’ve seen guys get backroomed, I just have never experienced anything similar to this. As this guy stood within punching distance of me, his name tag was clear as day and I was too nervous to look at the damn thing… Shame on me I know. I’ve googled “Bally’s slot host, Bally’s card counter catcher, surveillance manager, security manager” and a few other searches, but found nothing.

After my trip concluded, Bally’s sent me a survey. I almost wrote,“TELL THE IDIOT YOU GUYS HAD FOLLOWING ME THAT HIS BEHAVIOR WAS VERY UNPROFESSIONAL AND ALSO VERY UNCOMFORTABLE FOR A PATRON OF YOUR RUNDOWN CASINO.” But my better judgment got the best of me.

After returning home, I received a survey, free play, a dining credit, and also free rooms for a future trip. So at this point I believe I’m still considered a desirable player, at least as far as marketing is concerned. We'll see how long that lasts.