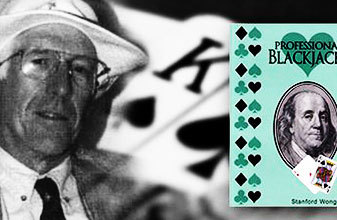 “Wonging” is a word made up by Atlantic City card counters in the late 1970s. It means hopping from table to table, playing only when you have an advantage. When I wrote the first version of Professional Blackjack in the early 1970s, I was making trip after trip to Nevada in which I made flat bets the whole trip, playing only positive counts. Then it worked great, but then there were few people doing it.

Wonging still works. Rather than sitting at one table for long periods, walk around and look at the cards in play at other tables. When you see a pack become profitable, sit down and play at that table. When the pack turns unprofitable, leave the table. If you do not play against unprofitable packs, you have no need for small waiting bets. Your waiting bet is as small as it can get — zero. Casino personnel do not equate leaving the table with making a small bet. A small bet tends to look bad, while leaving the table usually passes unnoticed. You must, however, make your standard bet against freshly-shuffled cards once in a while lest casino personnel catch on to you.

The only justification for playing in unprofitable situations is “advertising.” If you think that leaving the table will look suspicious, then stay and play another round. Only play in an unprofitable situation if doing so will buy you more playing time. Otherwise, play only when you have the advantage or when the pack is neutral. Have patience. Do not play just to be playing. If you do sit down at a game in progress because you see small cards, and then aces and 10s pop up to make the count negative, get up and go without playing a single hand. If you are already playing and the count goes negative, you should leave the game.

You are not trying to get in the most hands possible; rather you want to play as many favorable hands and as few unfavorable hands as possible. Not playing at all costs less than playing against a negative count. Hopping from table to table with a uniform bet is more profitable than sitting at one table and varying your bet size, because when you stay at one table you have the advantage only a fraction of the time. The rest of your time can be better spent looking for profitable situations than betting small because the dealer has the advantage. Jumping in with small bets is easy against multiple decks; you find a dealer who has just shuffled and watch a few rounds without playing. If the pack becomes profitable, you jump in and play; if it becomes unprofitable, you leave; and if it stays neutral, you can stay and watch another round.

Against a single or double deck, or with big bets, subtlety is required, and watching the cards without playing is an art. If you watch a single or double deck being shuffled, watch a couple of rounds being dealt and played, and then, when the count is good, jump in with a big bet, you will find that you are being eyed suspiciously. Perhaps your action will even cause the dealer to shuffle away a profitable situation. When looking for a profitable single or double deck, keep walking as you are looking at the cards at various tables. Never take root and stare. You may stop and watch, if a round is in progress, because you must wait until the round is finished before you make a bet. When the dealer is ready to deal the next round you have only two valid options — bet or walk away. Do not watch a second round at that same table, because your watching may be watched. You do not want anyone to question the chastity of your blackjack playing.

You may wonder whether betting exactly the same amount each hand hour after hour and day after day might be interpreted by casino personnel as unusual behavior. It has never attracted any attention to me. You may vary your bet size if you wish, but be sure to do it in a manner that is not suspect. Do not appear to bet bigger because the pack has turned more favorable. You want to be mistaken for a gambler. A lot of gamblers bet small when they first sit down at a table and bet bigger after they have been at the table for a while. You may do this too if you wish. For example, bet half your standard bet on the first hand you play at a table, then go to your full standard bet on the next round if you stay. You can usually switch back and forth between one hand and two hands without attracting attention. For example: When the pack is profitable, bet two hands; when it is neutral, bet one hand; and when it is lousy, walk away.

If casino personnel watch you closely in an effort to discover why you hop from table to table, you could give them a reason for what you do. For example, you could leave a table only when the count is negative and you have just lost a hand, and never leave a table after a win. Your expected win rate will be reduced slightly if you play occasionally when the cards are unfavorable, but the offsetting benefit is that the pit bosses will attribute your table-hopping to your losing a hand.

You can increase your bet size against a fresh shuffle without attracting adverse attention. You might consider doing so if you have been playing two hands and winning. Suppose you have been winning with two hands of $200 each. If you think that cutting back to one hand of $200 when the dealer shuffles will look bad, you might switch to one hand of $300. You now have only $300 on the table instead of $400, but the dealer and pit boss may think that you are increasing your bet size.

To get more money on the table, you can double up after a loss, or let a winning bet ride. If you really want to look unlike a card counter, play two hands of unequal bet size.

If the pit bosses think that they know why you do what you do, and if they think that what you are doing does not involve getting an edge over the casino, then you can play indefinitely.