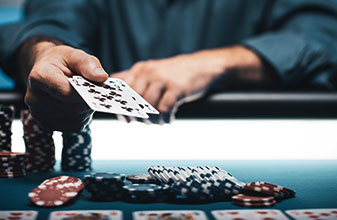 I've noticed that almost all of my large blackjack losses are in shoes with a steadily rising True Count… i.e. TC +4,5,6 in the first half of the 6/8 deck shoe. The biggest problem seems to be shoes with high concentrations of low cards in the first half and high cards in second half (before or after the cut card). Trying to stick with the mathematical approach betting directly to TC seems to not be effective.

My question is: Does it make sense to play with two different spreads? One more conservative in the first half and more aggressive in the second half of the shoe. Second half, you know the high cards are going to have to come out -- not necessarily in the first. I could see there being in issue with under betting and not taking advantage of + TC situations in the first half. Is this just a normal counting problem or does this strategy hold any water?

Dog Hand: It's just normal variance. Advantage players know that the biggest losses (as well as the biggest wins) come in the high TC shoes, because that's when we have the big bets on the table. It's hard to lose $1000 when flat-betting only $25. I still remember a shoe on a low-stakes $10-$300 6D table where I started at 2x$10, but by deck 2 (after the dealer had made several multi-card 21's, driving away the other players) I was heads-up at 2x$300, where I stayed for the last 4 decks. I don't know how many $300 bets I won that shoe, but I know I lost 10 more than I won, since I managed to lose $3K in a single shoe on a red-chip table.

The problem with your "dual ramp" approach is that you are not guaranteed to see the big cards in the second half of the shoe -- they might instead be behind the cut card.

Ryemo: As Dog Hand mentioned, you’re going to lose the most money in high counts. It’s just normal variance. Forget the idea of two different spreads. Just decide how much you’ll be betting per true count and just follow that.

Don Schlesinger: The true count doesn't show any tendency to rise or fall. The running count tends to revert to zero, so if it's high, it will eventually drop, and if it's low, it will rise, since it has to get back to zero at the end of the deck/shoe.

But the TC doesn't exhibit the same tendency, since, as the RC, say, drops, cards are used up, so the TC, which is RC/decks remaining, stays the same, as BOTH the numerator (RC) and the denominator (decks remaining) are dropping proportionately, in tandem.