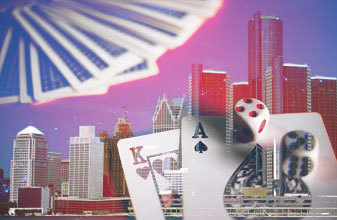 I understand that in a few Indian casinos in northern Michigan, blackjack dealers show the player their hole card only when necessary to decide the winner of a hand. Current Blackjack News describes it as the “hide” rule. It is difficult to imagine this without having seen it in practice. Can anyone describe this in more detail, perhaps with an example or two? Presumably it is designed to harm the play of advantage players. Is it possible to position oneself at the table so as to see all cards in play?

Now imagine what could happen if you end up busting 4 or 5 times in a row which could easily happen. However, with more players at the table, it is more likely that someone will have a pat hand so the dealer will have to show his hand.

Here is another example. Suppose again you are playing heads up and you were dealt a blackjack and the dealer has an Ace up. The dealer asks for insurance or even money. If you take even money, the dealer will not check for blackjack and just pick up the cards without showing the down card.

Random Player: Thanks for those examples. Sometimes in other locations (Las Vegas, elsewhere), you come across a dealer who performs a crafty little move when it comes to their bottom card -- they try to turn it over and scoop it up very quickly with minimal exposure. When I've come across this, I have found it challenging, but certainly possible to always see the bottom card. I wonder if this is the action you are describing. Perhaps these dealers learned their trade in northern Michigan.

21forme: Here's what I once did in a similar situation: I was playing a double-deck pitch game and the dealer knew I was counting. He thought he'd mess with me by not showing me his down card. Next hand I busted, and I kept drawing cards. When I had more than 21 face up, he figured out something wasn't right. At that point I said, "You want to be a jerk, I can play games, too." He didn't do it again. Unfortunately, this wouldn't work if it's casino policy. I presume this is an Indian casino, so there are no enforced rules governing the game. If there were state rules, it would be worth checking to see if they can legally do that.

Nevada Resident: Isn't an unseen card just an unseen card? Isn't this effectively just a game with slightly worse penetration than it otherwise would appear; same as the pen being reduced by the number of unseen cards that normally would be seen?

Flyboy: Yes it’s just an unseen card. There seems to be a game protection downside to this silly policy: Surveillance can't ascertain whether or not that blackjack payoff is legit when the dealer has an ace showing. Wouldn't it be easy for a crook to collude with a dealer who would pay off player naturals no matter what the hole card was? Or are there just not enough natural vs. ace situations for this to be a concern.

Dog Hand: Happens just over 0.1% of the time, so probably not a gold mine.

If we assume basic strategy (so no insurance taken), this'll add 0.15% to the player's EV.