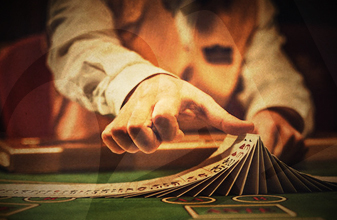 Your advantage or disadvantage if you play basic strategy varies with the rules and number of decks used. Current Blackjack News (subscribe here) is a good source for keeping up to date with the rules at various casinos and your advantage or disadvantage. Commonly you are at a disadvantage of about 0.5% with basic strategy. Table 4 contains more detail on estimating the casino’s edge right after a shuffle. The starting point depends on the number of decks used. Simulation shows that a basic-strategy player playing with the benchmark rules has an expectation of 0.01% for one deck, -0.32% for two decks, and -0.5% for four or more decks. The negative signs mean the casino has an edge. The rest of table 4 contains numbers that you can add to one of those starting points, depending on how the rules you face vary from those benchmark rules.

Early surrender gives the player 0.6% (dealer stands on soft 17) or 0.7% (dealer hits soft 17), of which 0.24% is against 10 and the rest is against ace. Table 4 allows you to find your expectation for the first hand after a shuffle. These are simulation results, and thus contain a small amount of random error. To a small extent, the effect of a given rule also depends on the number of decks used. The best presentation of how your edge after a shuffle depends on the rules is BJedge, an inexpensive software product.

Also good is Peter Griffin’s The Theory of Blackjack. You also can generate such numbers yourself with Blackjack Count Analyzer if you instruct the software to shuffle after every hand. Table 4 applies to the first hand after a shuffle. For subsequent hands, your edge might be higher or lower. For each point increase in the count per deck, your advantage goes up by 0.5%. (It goes up by increasing amounts at high counts, presumably due to insurance becoming more valuable the higher the count.) Generally, in a multiple-deck game, when you have a count per deck of +1 you are playing even with the casino — no advantage or disadvantage. At a count per deck of +3 you have an advantage of about 1%. The 0.5% per count per deck works both ways: The dealer’s advantage over you increases with negative counts. At a count per deck of -1 you are at a disadvantage of about 1% — if you play perfectly. If the count per deck is -4, you can expect to lose at a rate of about 2.5%, which is 2% faster than if the dealer were to shuffle. Winning with card counting requires betting more money when you have an edge than when you are at a disadvantage, and playing your hands correctly.