Dealing with fluctuation: Is something genetically hard-wired? 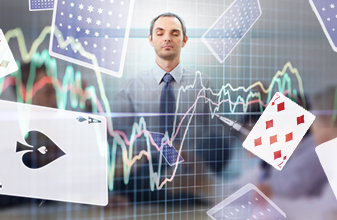 I've been an advantage player (AP) most of my adult life. You would think by now that I had developed a thorny indifference to fluctuation. Indeed, it is quite possible for me to bet what to many people is a month's salary without much thought. A theory that has been advocated is that top-level card counters become immune to the swings through a psychological toughening process.

I never believed that. I think that what is happens is that when you start out you don't really 100% believe in this stuff till you've amassed a big pile of winnings, probably enough that you feel you'll never lose it back. I am not talking about quasi-ploppies who read a book on card counting and are taking their first clueless, tentative steps -- I mean serious, disciplined players with a voluminous library who have got enough cash together, understand ROR, the importance of penetration, how to hustle comps, dealer errors, etc. Intellectually you know you are going to win of course, but there is that nagging doubt emanating from the id. Some guy on the left-hand side of the bell curve has to be losing for ten years -- are you really sure it isn't going to be you?

Further, as your bankroll gets bigger, the swings, while perhaps large in absolute terms, are small when measured in proportion to your initial wealth. Losing $50K is no big deal if you have a $500K bank. Losing $10K when you have a $20K bank is a potentially huge disaster.

For these reasons, I've never accepted some of the perceived wisdom handed out on these pages. For example. I don't agree with the common theory that small bankrolls aren't worth protecting -- there is no such thing as a small bankroll; there is only YOUR bankroll.

Moreover, high-stakes AP's who are underbetting their bankroll tend to rationalize it by talking about how difficult it is to rebuild a large bankroll. This is rich guys telling poor guys how to bet but not following their own advice.

Because anybody who is reasonably fortunate and reasonably good at AP quickly finds themselves busting up against table maximums at anything other than low-edge plays that I disdain nowadays, I hadn’t had a chance to test this concept for a while. But, recently, I had a rare opportunity to bet approximately half-Kelly on a one-off deal. There was the potential there to lose a very significant fraction of my total wealth, though of course a potentially huge upside also.

I was nervous during the whole affair. I had to force myself to shove the money out. I experienced severe emotional surges during normal, mathematically expected swings. I'd forgotten how that felt.

This tends to reinforce my conviction that dealing with risk is something you are genetically blessed with -- "psychologically abnormal" I think is one of Stanford Wong's phrases. If you are not, then you just have to force yourself to do it against your nature or quit and go do something more boring. I remembered devising a half-dozen coping mechanisms while still building a bank; pieces of mental trickery -- they worked wonders when I was winning, and were quickly abandoned when I actually lost.

Anyone think different? Do the walls of your emotional tolerance harden with time? Am I speaking a secret truth, total nonsense, or a mixture of both?