Cumulative Risk of Ruin (or Career Planning for the Professional Gambler) 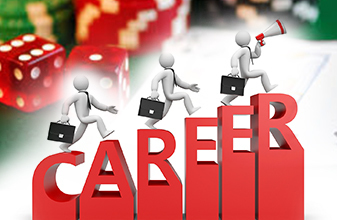 Currently, much of the advantage play community focuses on the risk of losing a bank before doubling it without resizing after session wins or losses. Little has been written on long term money management. This article focuses on managing long term risk while keeping the method of doubling bankrolls.

Currently, there are two tools available to the advantage player for long term risk management. The optimal tool is the Kelly criterion. But to use Kelly's technology properly, each bet should be sized according to the player's current bank. The more one does not resize one's bet sizes, the less one is playing by the mathematics of the Kelly criterion. We shall show that never resizing after setting initial betting levels is disastrous. The second tool is Don Schlesinger's trip risk of ruin formula, which does not take into account either the current gambling paradigm of doubling a bank or the problem of resizing bets.

As an illustration of the above concept, suppose that a gambler is currently making his living at blackjack. He has a $20,000 stake which he can double twice a year. He uses the $40,000 as living expenses. Unfortunately, even with conservative play he is destined to have a limited career. While it may be very liberal, say he is playing via half the Kelly criterion without resizing. Then the probability of doubling a bank before going bust (RoR) is about 1.8%. The probability of going bust before doubling a bank n times is equal to

Here, CRoR stands for cumulative risk of ruin. Unfortunately, this means that that the probability of not surviving 5 years in the above scenario is (1-13%)^10=17%. The probability of not surviving 10 years is (1-13%)^20=31.1%. If RoR is greater than zero, then the above formula approaches zero as n grows large. The long run is a bad thing in this scenario.

Certainly there is some happy medium between spending all casino winnings and not spending anything that still provides an acceptable long term risk of ruin. The remainder of this article will explore the risk involved with various reinvestment strategies. If a gambler plays with a decreasing risk of ruin, he might be around indefinitely. If r_k is the probability of not doubling our kth bank, (1) may be replaced with

where k runs from one until the end of one's advantage playing career. It can be shown that if r_k shrinks sufficiently swiftly, then (2) will not approach one and failure is not certain in the long run. However, it must be stressed that just any decreasing sequence of r_k's will do.

The main tool in risk of ruin calculations is certainly

where r is the risk of ruin, B is a bankroll, E is expected value per hand, and s is the standard deviation per hand. Versions of this equation have been presented in Blackjack Forum, Blackjack Attack, and the International Conference on Gambling. If a game with fixed standard deviation and expected value is played, then one may use (3) to express (2) purely as a function of bankroll. It follows that

where E and s are constants, and B_k is the size in units of the kth bank. For example, say one is playing a double deck game with E=0.02 and s =2.5. Let the initial bank be 500 units. Say 200 units are reinvested in our bank whenever it is doubled and a gambling career is the time to double 7 banks. Then r_k=exp(-(B+(k-1)200)E/s ^2), and by using a calculator it can be determined that

In fact, if the number of banks is increased to a number greater than 7, then CRoR will remain 5.58% accurate to 0.1%. So it has been shown that it is possible to be a professional gambler for an indefinite length of time.

Unfortunately, the problem of increasing our unit size has not been addressed. In the above example the size of the bank in increasing, but a gambler following the plan will play with a constant expectation in dollar terms. If someone is satisfied with their current expected win level or may find it difficult to increase their unit because of practical terms, then this may be a satisfactory model of risk.

Instead of reinvesting a constant number of units for every bank doubled, suppose one reinvests a fixed fraction of winnings back into a bankroll after doubling a bank. For example, consider the case where after doubling a bank, 20% of all winnings are put back into the next bank. If s and E remain at 2.5 and 0.02, and B=500 is the initial bank size, then the kth bank is equal to B(1+0.2)^(k-1)=B(1.2)^(k-1) units. It follows that the risk of ruin for the kth bank is equal to r_k=exp(-2(1.2)^(k-1)BE/s ^2) and the cumulative risk of ruin after 5 banks is equal to

In fact, if the number of banks is increased to any number greater than 5, CRoR remains at 7.6% accurate to 0.1%.

The problem of unit resizing can now be addressed. Let s , E, and B be as above. Say that when a bank is doubled, 40% of all winnings are put back into the next bank. Also, when a bank is doubled one can increase the size of the units by 20%. Then the kth bank is of size (B(1+0.4)^(k-1))/(1+0.2)^(k-1). In general, if a is the fraction of winnings reinvested in the bank and b is the percentage the unit size is increased, then the kth bank is equal to

It follows that the cumulative risk of ruin is equal to

Where k goes from 1 to the end of one's gambling career. Note that (7) approaches one if a<=b. So the increase in unit size must be less than the proportion reinvested into the bankroll.

If the preceding variables are used for s, E, B, a, and b, then CRoR is equal to 6.94% for all k greater than 3. Note that in this scenario, one's expected value in dollars is increasing 20% after doubling each bank. So for example, if one is making $20 per hour on an initial bankroll, then after only 5 banks one's expected value is $20*(1.2)^5=$50 per hour. After 10 banks, one's expected value is $124 per hour. Note that 40% of all winnings are reinvested though, so one is only making 60% of the above figures for living expenses. Also, one may also pay taxes on all of one's winnings, not just the portion used for living expenses.

The previous method may not be how one wants to manage a bankroll, but gives the tools necessary for measuring the total amount of long term risk in one's gambling career. For example, one may note that having an arbitrarily large expected value in the long run is unrealistic. Say if one determines that the maximal hourly expected value cannot be greater than say $500. Then after E reaches $500, simply set b=0.

Another adjustment that may be made is to fix one's long term risk of ruin by picking a and b after each bank is doubled The first thing to realize in this regard is that we are only concerned with the ratio (1+a)/(1+b). Then use Excel or some other tool, solve for the value of (1+a)/(1+b) that sets CRoR to the desired level if reasonable values are used, CRoR should converge within almost any desired accuracy within 20 banks.