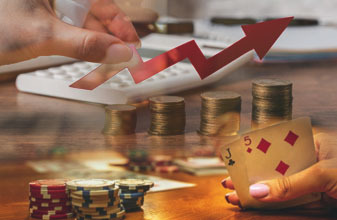 I got backed off over a year ago from a blackjack game in a remotely-located casino that offered the Slingo side bet. I was attempting to organize a team play but now the game no longer exists.

The Slingo side bets yielded an eight percent advantage using Hi-Lo. This game had lasted for many years due to its remote location and the $10 maximum. But it was actually fun and required a minimal bankroll to play. I used a strategy to beat it once the true count reached 1.5. Had I been able to find a partner just to count the eights, the edge would have been about ten percent. I couldn't count the eights and Hi-Lo simultaneously and implement the betting strategy, so I settled for the baseline eight per cent edge. They must have known it was beatable since they only allowed a $10 maximum.

I believe where I played was the only casino in the United States still offering this side bet. They bragged that they had exclusive rights to it. Dealers also told me some players (advantage players?) came from all over the country to play it! I'd go play it one weekend a month during the tourist season.

My approach was to match my blackjack bet to the total of the Slingo bets and I got backed off after fifty hours over months. I figured this looked natural, as if I lost the Slingo bets I could break even by winning the blackjack bet. But of course that meant my blackjack bet correlated to the count. Since my maximum bet was only 2x70, I figured they wouldn't care about someone on a shoe game using such a small bet spread as 2x10 to 2x70. Apparently they did. Or maybe it was simply winning the Slingo bets. They were quite volatile -- I'd easily win or lose a grand during a trip despite my low stakes, unlike almost any of the other patrons. So either I dumped a wad of cash and/or I accumulated a massive pile of chips. And all Slingo payouts exceeding $100 had to get pit authorization.

Another option would have been to flat bet the blackjack hands at 2x10 while betting up to $70 on the Slingo bets. That might give the impression I was just simply a Slingo degenerate. I wonder if I would have lasted much longer playing this way. In retrospect I wished I'd played it this way. A few ploppies did play this way.

Besides believing it looked natural to match the blackjack bet to the side bet, there were many high counts where I'd lose all the Slingo bets but break even by winning the blackjack bet. Of course there were times I'd lose both on both hands -- that was when the benjies were being vaporized three at a time. I had some absolutely brutal steaks and then of course the incredibly good ones, too, when I'd be dealt BJ,20, or 19 hand after hand and the chips would rapidly pile up in front of me.

It was a really fun game to play. Look for it. It’s doubtful it will appear again, but who knows -- maybe it’ll show up in your neighborhood!