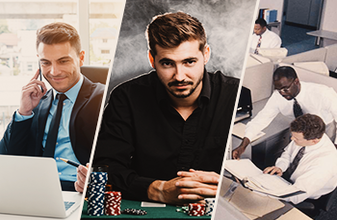 Advantage play for a living is one of the more stressful ways to lead a life. Having been involved in this for years now, based on my experience, three of the toughest things about the AP profession are:

In AP, more often if a game has Expected Value of as much as $1,000/ hour, you still have to travel (expenses, time and effort) and may or may not be able to get to play the game for various reasons. In most square jobs, with time, your compensation goes up for the same or similar hours in the job. While one could argue that increasing the stakes can provide the same effect, you deal with heat and backoffs and the unsavory casino environment. Many forms of AP are not easily scalable. Most square jobs help in advancement and as one gets into management roles, there is career advancement as well as higher compensation. This doesn't even account for the healthy social interaction associated with the “right” job.

All the above plus the fact that having a business would help provide residual downstream income that is even better than square jobs.

My point being, unless there are certain factors unique to the person, I think that both square jobs and owning a business have an edge over the risks and unpredictability of an AP career.

Upon reflection, I realize that as AP’s, the willingness to take risks is inherent and that is similar to owning a business. Also, owning a business requires a different kind of passion and different set of tradeoffs, such as being available most of the time and caring for employees, in return for less travel. So stress levels are likely to be similar.

AP’s do what they do and I think it is an instinctive choice rather than a logical choice, at least in the beginning. So all the comparisons don't mean much because the fact that another job has better trade-offs doesn't mean he/she can immediately jump in and start that role.

Friendo: As an AP, your income more directly reflects your skills and effort. AP is closer to a business than to a square job, in that there are fewer middlemen between you and the fruits of your efforts. If you put in a few extra road trips and work more opportunities, you will have proportionally higher income; in a job, you might get 7% instead of 3% in your year-end bonus. In some sense, you are closer to being capital than labor as an advantage player.

Those managers you mention are usually just worker bees with honorific titles who bear the burden of responsibility without real authority. They are trapped like the workers, with little autonomy. Nearly all large employers treat employees like so much organic waste.

Running a business (something you're already doing as an AP) can require several plane flights each month, with the same “growing old in airports” standing at car rental kiosks. The CEO’s know have dazzling frequent-flier records.

I think that if you have made AP work as a career, you will be happier running a business than getting a square job, because you have tasted autonomy and handled it well enough to make a living. Cubicles everywhere are staffed with people who could help the company more if they were not stifled by bureaucracy and infighting. But there's no easy way. People who run businesses also have nervous breakdowns as project deadlines come into view.

Office/professional jobs are a good fallback career for those without the discipline for AP. I have taken only a handful of exclusively-AP trips. I have no idea whether I'm up to being full time, but the lessons I have learned as a dilettante have been sobering. Trips are an object lesson in how I could run my life leaner. If you're at all honest with yourself about your business endeavors, an AP trip will find every leak in your habits and skill set.

I knew in advance how many hours of play per day it would take for each trip to pencil out; by this, I mean EV >= 5*(expenses), which is what I'd consider a bare minimum standard of profitability. Some full-time professionals will see that ratio as laughably low.

I had to map out the casinos in a region, figure the driving or walking times between casinos, schedule meals (short!) and session lengths -- plus think about Plan B schedules should backoffs occur, while weighting session lengths according to anticipated tolerance levels, need to avoid rush-hour traffic for drives between casinos in major cities, and need to hit at least two (preferably all three) shifts at several places.

First couple of days, wake up at 3:15 am. In the rental car by 3:45 am to catch the graveyard shift at a couple of casinos, then jump to the next one just as morning rush hour is ending. Hit five places on day shift -- take 25 minutes for lunch, or just eat during rush hour, or power bars in the car (yech) -- then start swing shift at the tail end of evening rush hour.

Rush back to motel, organize everything, take notes on casino employees, session lengths, wins and losses, lay out clothing. Go to sleep with everything ready for launch the next morning, when you'll barely have time to shower, dress, and dive into the car.

First day, play until 8:00 pm, then aim to be asleep by 8:45 pm, then up again at 3:15 am. Second day, stay later into swing shift -- say, 11:00 pm -- with plans to sleep later on the third morning, and leave the hotel well after the morning rush hour. As the days go by, push the schedule into swing and graveyard, emphasizing the least tolerant casinos during the afternoons and early evenings, and the rest on late swing into graveyard.

Last day (usually fourth or fifth day): longer sessions everywhere. Play longest, or possibly only sessions, at places with best rules and perceived lowest tolerance. On the last day, it's play as long as you can stay alert -- to 3-4 a.m, or whatever time will allow at least five hours of sleep plus getting to the airport in time for one of the cheapest flights home.

Breakdown of a four-day trip:

The morning alarm on your phone is to be obeyed without fail. Do you know where to get fuel for the rental car? Have an idea where the nearest grocery store is, or the locations of sandwich shops on routes between casinos? A 15-minute round trip out of your way means 15 minutes spent not playing or not sleeping: your choice; and it's very easy to end up with 45 minutes of mundane logistical stuff which you thought would consume only 15 minutes

My first time out, I hit 70% of my playing-time goals; second time out, 80%. However much time you budgeted for scouting on your first visit to a city, triple that figure.

No regular job requires this level of discipline in several areas in a day. I was my own travel booker, scout, driver, planner, personal assistant, valet, security and bookkeeper. On my second trip, I was sick for two days, but played anyway. Now, imagine being on the road 18 days a month. The only difference is there will probably be a couple of days on the road available for sightseeing or relaxation -- dictated by the necessity of not going insane, if nothing else. Higher stakes will also mean more down time, but there will also be changes of plan, such as leaving a city earlier than planned due to backoffs.

You have to discipline yourself to push out the money, keep sessions reasonable and as planned, and make adjustments on the fly for unexpected conditions or opportunities while maximizing your EV for the trip: I am poor at this last one. Even the concept of leaving after two maximum bet cycles, which sounds so simple, is clearly beyond the discipline levels of many players -- we’ve all read stories of idiotic, hare-brained, ultra-moronic turbo-dumbass session-win management and equally stupid playing-longer-until-you-get-it-back stories, mostly from people who have been successful in other careers. That they can be successful in regular jobs or businesses without handling the most basic element of AP discipline says much about the relative ease of regular jobs versus AP.

A flake would either fail out of this business immediately or barely get by with a stagnant bankroll until a bad year knocked him off for good -- you must grow your bankroll each year, or your risk of ruin is 100%. Expenses continue unabated. In a day job, there is usually latitude for screw-ups, redoing the night before a deadline, and calling in sick with pay. An AP can't call in sick on a trip, and there is no means of making up for missed hours on a trip without bumping the flight back a day and paying for another night in the motel. You don't play, you don't earn. If you miss an hour, you can't go play twice as well, or for twice the stakes at a later hour and make up for it.

Then there's the other stuff, like preparation. Usually this happens at home, but James Grosjean refers to doing several morning hours of preparation during a trip. Grosjean seems to be more successful than most of us. I don't wonder why.

Wham: Work is all about risk vs. reward. A successful full-time card counter with a decent-sized bankroll can easily make $150k+ per year. An advanced AP can make much more. There are very few jobs where you can make that salary.

Let me be clear there are different types of jobs: salary and commission. Commission jobs are similar to being self-employed or owning your own business. A deli worker on salary just makes sandwiches -- not a lot of stress and very little skill needed to do the job. The risk of something bad happening to the worker like getting sued or beaten up is low. The risk is low, so the pay will usually be low.

The opposite is true of someone in upper management at a major company who probably has a much better chance of being sued or fired. It's much easier to find a $20k per year job than a $200k per year job. The risk, education, and skills required for someone in management is greater, so the pay is greater.

I definitely think advantage play falls into the commission-type job or entrepreneurship. You can't compare a self-employed person to someone working a 9-5 salaried job. AP vs. self employed -- that's a tough one. Each one takes on a lot of risk and a self-employed person can work just as hard and travel all over like an AP, and lose money or worse, be robbed or sued. It all goes back to risk vs reward -- how much risk are you willing to take and what is the acceptable reward?

In my experience, AP work is a high stress activity, and it gets worse the farther you have to travel for decent games.

I have had many times in my career where I personally decided to take a few months off before going on another blackjack trip.