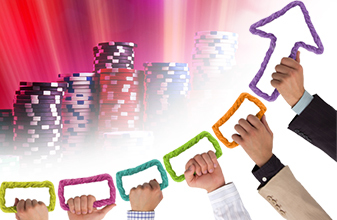 If someone were to tell you that he/she is going to the casino to go make some money, the majority of people would not believe it. There are, however, opportunities for someone who is informed. Several casino games have a very small advantage over the player, but the casino makes money because of the number of times per hour the person plays.

For example, let’s say a person’s expected loss on one pull of the handle on a slot machine is 5 cents. At 800 pulls per hour, that works out to $40 an hour. Of course sometimes the person loses more than that, and sometimes the person will win, but this is an average figure.

Having said that, since the casino’s actual edge over the payer is so small, if a player can inform him/herself as to how to improve one’s odds, oftentimes the tide can be turned. Blackjack, video poker, poker, progressive slot machines, sports betting, horse betting, and casino tournaments can all be beaten if the player really learns the mathematical principles behind playing these games. Not to mention, money can be made off casinos in other ways, such as receiving free dinners, show tickets, hotel room, and even airfare, and by taking advantage of coupons and promotions that casinos are offering. Some people play an even-money game, and let the casinos pay for their entire vacation.

Blackjack was one of the first modern casino games where players started making a legitimate living. Let’s briefly describe how blackjack came about, and why it is beatable.

Blackjack started a hundred years ago or so, and when it first began doubling down, and splitting were not allowed, and player blackjacks paid even money. The house got the advantage over the player, because when both the player and dealer hands bust, the house wins.

This gave the casino a significant edge over the player, 7 percent or higher (depending on the player’s skill in playing). Customers would lose their money so quickly that no one would play the game, so the casinos added some rules to make the game a bit more competitive, ie, splitting, doubling down, players receive 3 to 2 on blackjacks. The casinos did not know exactly how much they were giving up to the player, but it didn’t matter to the casinos because they still made a significant amount off of the game.

Scientists used computers to determine a “basic strategy” for the game. This is the optimal way to play the cards based only on the knowledge of your individual hand, and the dealer’s upcard. With perfect basic strategy play (which is not terribly difficult to learn) the player is almost even-money with the house, and can sometimes have an advantage based on the particular rules that particular casino is offering.

Card counting puts the odds in the players favor. Card counting is not illegal. It is simply using one’s own brain to improve the odds. Blackjack is susceptible to card counting because blackjack is not like any of the other table games.

The other games fall prey to what is known as the “Law of Independent Trials.” This means that each roll of the dice or each spin of the ball, has nothing whatsoever to do with the one prior to it. If red hits 12 times in a row in Roulette, it’s neither more nor less likely that the next number will be red.

In Blackjack that is not the case. If someone is playing single deck blackjack and in the first round of cards 4 aces come out, that means there will be no more blackjacks until the dealer shuffles. Since blackjacks pay the player 1.5 times his bet on blackjacks, he will have a significant disadvantage on the next hand. On the other hand, if two rounds have been dealt and no aces have come out, then the player’s probability of receiving a blackjack is much higher, since the four aces are dispersed among many fewer cards. In this case the player should have a healthy advantage.

Card counting is not memorizing every card. It is simply assigning a plus or minus value to a card. One very powerful count, and perhaps the most commonly used count is the hi/lo. Start the top of the deck with zero. Then add one (+1) for each 2,3,4,5,6 that comes out of the deck, and subtract one (-1) for each face card or ace. A highly positive count would indicate many large cards in the deck, which is a favorable situation for the player, and a large negative count indicates many small cards remaining in the deck, and a large disadvantage for the player. (This would be a good time to go to the bathroom, or something… anything but put your money on the table :->)

Most beatable casino games are beatable for similar reasons: the vast majority of people who play the games make awfully poor decisions, so the casinos offer games that keep these players odds somewhat close. After all, you must have some winners sometimes. Players who know the proper strategies, and implement them can put the odds in their favor. These people make up a very tiny percentage of the gamblers in the casino, so the casino still profits nicely from their games.