Get your money's worth on tips in a poker room 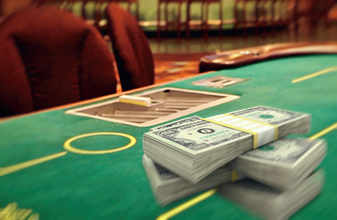 In a poker room, I always tip a winning pot if it sees a flop ... if I just scoop blinds and limps, then no tip, and no one objects since the hand was quick and I didn't win much anyway. Not tipping, or infrequent tipping, such as often done at blackjack, is something other players remember (and will label you as tight), and dealers definitely remember.

Mind you, my tip is almost always just $1, unless I win a massive pot. For a pot over $200, I take the size of the pot, divide by 200, and round to the nearest integer to determine the size of my tip. My biggest tip ever was $10 -- should have been $13 by the rule above, but that would have looked calculated, so I made it $10.

I tip because I want to be on the good side of the dealers. I compliment their speed and efficiency whenever they aren't so bad that it would be implausible, and I joke and chit chat with them a little here and there. I'll say "Hi" if I'm walking through the casino and see them going to or from a break room, and I address them by name, as a friend.

And every once in a while, I ask them about the other players.

And boy, do I get wonderful intelligence from them. Everything from opponents' real names or 2+2 names, how often they come in, what specific days and times I can expect them, what type of bankroll they are alleged to have, information on what has put them on tilt in the past, who they might collude with, et cetera. I have a notebook full of intel on key regulars, focusing particularly on the really good ones and the really fishy ones (average players are the same everywhere). I cross reference the things I learn from the dealers with scuttlebutt from the local poker forums, and figure out even more.

EXAMPLE ONE: A certain fish is very likely to play on a certain night, eh? So ... if I see him the next morning, he's tired, wired, and either chasing after a loss or spewing chips after a lucky night. Hey poker room boss, remember me, the guy who jokes with you all the time and keeps the dealer's happy? Mind if I jump the line a little? Can you get me on that table there (where my fish is swimming) next time there's an opening? Thanks pal, I love the way you take care of me.

EXAMPLE TWO: Look who just sat down next to me ... a very talented, young, online player, whose name I learned a few trips ago. According to his Facebook, he just broke up with his girlfriend. I think I'll talk about how good it is to be in a relationship, not to him, but to the guy on the other side of him. Look at him fume! When the right cards come along, he's going to tilt his whole stack to me.

EXAMPLE THREE: Social security and welfare cheques come on certain days, and certain fishy regulars take them straight to the poker rooms. Oh look, four such people at the same table. Dealer, may I have a "table change" button? I'm jumping over there as soon as I can. They've been bankrupt and waiting for a week or more for the chance to gamble again, so they'll be extra loose. I'm going to set up shop, play tight aggressive, and honestly feel just a little bit bad for them.

Always tip in a poker room! Just don't overdo it, and try to get your money's worth.