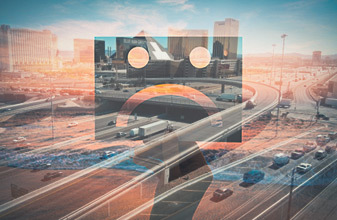 Most Las Vegas locals and visitors, advantage players and good casino customers alike, agree that reconfiguring the Interstate 15 / Tropicana Avenue interchange would be a much-needed improvement to traffic flow in the vicinity of some major Las Vegas event centers, including T-Mobile Arena and Allegiant Stadium. But one large local gaming company is unhappy with the current plans.

The planned project is aimed at improving traffic flow around the south end of the Las Vegas Strip, directly affecting efficient movement around the two facilities. Traffic is a mess on event days due to the lack of adequate parking around the arena and the stadium, which locals would have preferred to be built elsewhere in the Valley. Now, Station Casinos says the project creates negatives for a purportedly long-planned resort project in the immediate area.

Station Casinos officials take issue with some of the road project’s design. The casino company owns nearly 100 acres on the northwest corner of Tropicana and Dean Martin Drive, the site of the Wild Wild West Gambling Hall, across from an In-N-Out Burger.

Scott Kreeger, senior vice president of development for Station Casinos, said during a state Board of Transportation meeting that the land can accommodate a multibillion dollar megaresort. However, Station has done nothing to develop or improve this land that it has owned for years. It has claimed for over a decade to have plans for a casino hotel to be named Viva Resort to be built there, but offered no prediction as to when this project might become reality.

“This represents an enormous existing capital commitment with our company and with the potential for us to continue to spend an enormous amount of further capital on the project,” Kreeger said. “This project represents, additionally, an opportunity to create thousands of construction jobs as well as permanent jobs once we open for operation. As well, it will be a new source of tax revenue for both the state and the county.”

The Oakland Athletics baseball team previously indicated some interest in the site as a possible location for a new ballpark if the team moves from Oakland to Las Vegas, but Station has made no comments about this proposed stadium, which would suffer the same lack of parking as the other two nearby facilities.

Nevada Department of Transportation officials said the long-planned Tropicana/I-15 project is expected to get underway in 2022.

Plans include revamping Dean Martin to run underneath Tropicana, eliminating a complex intersection and traffic signal. Access to the northwest and southwest would be on frontage roads connecting Tropicana and Dean Martin.

“The way that the plan is currently contemplated, we are not satisfied that this meets our requirement for future development of the site,” Kreeger complained. “The ingress and egress that is currently being proposed will limit our ability to develop to the full potential of the project.”

Gov. Steve Sisolak noted that the highway project has been needed for years and he doesn’t want it stalled any longer. He suggested that state transportation officials, Station Casinos executives, and other stakeholders meet quickly to try to resolve the issues.