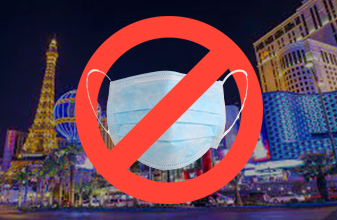 The state of Nevada no longer requires people to wear masks in public indoor spaces, in a directive issued by Gov. Steve Sisolak.

The Nevada Gaming Control Board followed with an order lifting the mask rule for casinos “unless a local jurisdiction still imposes such a requirement.” It is unknown yet which, if any, Nevada counties may still require masks indoors.

Sisolak, who is seeking reelection in November, potentially against strident anti-maskers and anti-vaxxers, has been under enormous pressure from casino interests and others to relax regulations. A group of Republicans competing to run against Sisolak have revved up their base with constant criticisms of Nevada’s COVID-19 rules.

Sisolak pointed to a decline in coronavirus cases in Nevada since the statewide peak in mid-January. However, the spread of the virus in Nevada remains far above federal Centers for Disease Control and Prevention thresholds for positivity and new cases per population of 100,000.

New cases statewide were 7,865 in mid-January, but now average about 1,280 cases daily, Sisolak said. This still-high case count has worried local observers, many of whom see no reason to lift the mask mandate.

LV Bear, an advantage player based in the Las Vegas area, was critical of the sudden elimination of restrictions. Bear said, “We get visitors from all over the world. If there is any place on earth that needs to keep the mask mandates in place, it is Nevada. I have been a strong supporter of Gov. Sisolak going back to his days on the Clark County Commission, but am severely disappointed that he apparently caved in to political pressure, against the interests of Nevada residents.”

A Reno casino patron visiting from Seattle, Michael McDuffy, said, “Without the mask rules, I won’t be back to Nevada until the pandemic is completely over.”

A Las Vegas casino employee who, because of fear of retribution from her employer, wanted to be identified only as Ashley, commented, “The governor says he realizes the pandemic is not over, so why is he risking our health and safety? Because my (casino) bosses told him to?”

Throughout the United States, cases and hospitalizations from COVID-19 have gone down after peaking earlier this year. A majority of Americans are protected against serious illness by effective vaccines and boosters, though a stubborn minority persists in resisting common-sense measures, often to their own detriment.

The Centers for Disease Control and Prevention still recommend wearing masks indoors in places of “substantial or high transmission” of the virus, which is still all of the U.S. except 14 rural counties with low populations.

In March 2020, Sisolak ordered casinos and many other businesses closed until early June 2020 to help prevent the spread of the virus. Unemployment went to over 30%. Hotel bookings stopped. The effects on the state’s economy are still being felt.

Nevada relies heavily on tourism and gambling. Las Vegas has over 150,000 hotel rooms, and casino taxes are second only to sales tax as contributors to the state budget, which helps allow Nevada to exist without imposing a personal income tax on its residents.

“While many question the effectiveness in stopping the spread of COVID, there is agreement that after two years more and more people are refusing to wear masks, which is presenting a challenge to employees who still have to act like the ‘mask police,’” the National Federation of Independent Business said in a letter to Sisolak.

Sisolak made his announcement soon after officials in several other states announced their plans to end indoor mask mandates.