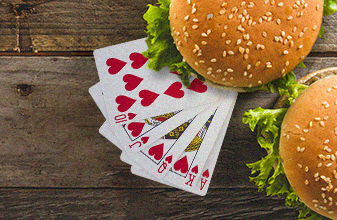 It’s difficult to maintain a healthy lifestyle as an advantage player (“AP”), especially frequently-traveling AP's. Flying, driving, long hours in an unpleasant environment, lack of adequate sleep, second-hand smoke, and the overall stress can take its toll. Though it's possible to eat healthy food while traveling to casino destinations, the temptation of not-so-healthy fare is hard for many to overcome.

Many AP’s travel a lot, much like traveling salesmen. Because of the lifestyle, we have problems with food, stress, and lack of exercise (and for some, drinking and smoking).

The biggest problem appears to be obesity. The reason for obesity is not always obvious. Obesity isn't just eating too much but not burning enough of it off, although that holds true for some people. Everyone is different.

If you are a carb craver, you are always looking for something sweet. The reason for this is because your body wants sugar. Contrary to popular opinion, it's not because your blood sugar is too low. That's like saying you're poor because the amount of money in your wallet is too low. It’s a silly statement because most of us can easily go to our bank or safe deposit box and get another 10k in cash. The same applies to the body. Your body, at its present state, likely has enough reserves to maintain enough blood sugar to last you at least a whole month, EVEN IF ALL YOU HAD WAS WATER. So why the cravings? Well, when you get your sugar kick, your brain experiences certain hormones and neurotransmitters that make you feel all warm and fuzzy.

If you eat correctly, you won't be craving as many carbs. Solutions:

1. Eat more fruit than sugary things. Fruit is made up of fiber/cellulose, with fluid and sugar within cell walls. These take some time to be broken down, slowing the delivery of sugar to your bloodstream, which is a good thing. Fruit also has vitamins, minerals and certain phytonutrients which are good for you. Exceptions: bananas and dried fruit. Don't eat an entire big banana. Just half of one, or an entire small banana. Also, dried fruit also is not good in large amounts.

2. Eat some fat, too. Fat slows digestion, and you want that. There are good and bad fats. Eat a low-fat diet, but then add the good fat back in. Just like some places short shoes, you want to do the same thing to your body's fat cells, and they'll hate you for it! Avoid overindulging in bread, pastries, and desserts that contain soybean oil, and any food in which soybean/vegetable oil is among the first four listed ingredients.

3. Eat better protein. In addition to eating better sources of sugar (like fruit), and eating fat, you also need to eat protein that is the proper type.

a. Lean meats
b. Low-fat dairy products (i.e., not sugary yogurt!)
c. Eggs and egg whites (throw away half to two-thirds of the yolks)
d. Soybeans (not the oil but the entire soybean, or tofu, or tempeh)

4. Exercise. If you are not a carb craver, but still wish to lose some pounds, you'll need to increase your metabolism. Contrary to popular opinion, you don't burn many calories by exercising. In fact, you burn relatively few calories while exercising. What exercise does is increases your metabolism (in some), so you burn more calories for the 10-20 hours AFTER you exercise, even though you might be lying down on your couch watching television.

If you begin an exercise regimen, you'll soon see if your weight drops. If it doesn't, it may mean you're one of those super savers whose body doesn't want to let go of fat unless you're in an actual famine (not likely). For those people, exercise is good, but extra exercise doesn't do anything but put your body in an emergency state where it wants to hold onto body fat even more. The bottom line is, until you know what you are, play it safe and don't over-exercise; 40-70 minutes a day (it doesn't have to be all at once) is fine. That's two half-hour sessions, or 1/24th of your time daily.

5. Eat earlier in the day. In a large study, participants experienced lower weight, having eaten the same amount of calories earlier in the day. So if your meals are at noon, 6 pm and midnight, if you switch to 8 am, noon and 6 pm, (with maybe 1 or 2 snacks in addition), you'll weigh less.

6. Don't eat just twice a day, but don't graze either. Both are bad. If you don't eat often, you'll end up making up the difference later in the day. If you graze, you're going to make too much insulin, which prevents you from burning fat. There is no ideal, but best is breakfast, lunch, and dinner, with one or two snacks.

7. Don't eat too many carbs, and eat healthier carbs.

Carbs to eat in moderation:

a. bread
b. pasta
c. potatoes

Carbs to eat more of:

a. everything else (especially natural green and red foods)

How much carbs should you eat? Well, if you're counting, you shouldn't eat more than one gram per pound body weight. So if you're 200 pounds, that would be 200 grams of carbs per day max. That's a significant calorie restriction. If you don't know what portion sizes are, go online and find out. Carbs means fiber-free carbs, so if something says 30 grams of total carbs, but four grams of that is fiber, that means it's really 26 grams of blood-sugar-raising carbs.

8. Eat the protein first. Protein consumption increases the hormone glucagon, which signals fat cells to release some fat temporarily and can be all tricked into releasing a lot of fat over time if done correctly. If you eat sugar first, you'll get the opposite: lots of insulin in your blood early, and the fat staying where it is (and possibly adding more).

9. Drink water or unsweetened tea. Don't drink too much while eating. Do you add extra water to your laundry in the middle of the cycle? Of course not, as that would dilute the detergent. The same applies to your stomach. Stop drinking 15-20 minutes before your meal, and don't have more than half a glass with your food. Then wait at least two hours before pushing through any significant amount of liquid. The more you drink right after your meal, the more stomach acid you'll need to make to drop the pH to appropriate levels, and the more base your pancreas has to make to raise it back to neutral in the duodenum. No matter how unbalanced you make it, your body will always end up with a balanced pH count, or you’ll die in minutes. Plus, that extra water tends to wash down whatever carbs you may have eaten right into the bloodstream too quickly, which is not good. Don't drink fake sugar products, like Nutrasweet or Splenda. What's wrong with water? We humans have been doing just fine with good 'ole H2O since forever. Don't like the way it tastes? Try a lemon, or go for tea.

10. Don't drink much alcohol, and watch the mixed drinks that are like 2 shots of alcohol and 50 grams of sugar....400 calories of waste. You thought that drink was good cover at the blackjack table, but it just increased your "risk of health ruin (RohR)" by probably 10%!

11. Stop smoking. If you can't, use a patch. If it doesn't work, see a doctor. If that fails, at least take some vitamins, especially vitamin C, to help counter some of the effects.

12. Relax. Have some free relaxation time each day. This means not counting cards. See a good movie or hang out with friends. This means go for a walk alone in a park or just sit at home or in a hotel room alone, quiet for 15 minutes, or whatever. This helps turn on your parasympathetic nervous system so you can digest food, reduce stress, increase your immune system function, etc. Nice, peaceful music helps.

13. Soups and stews are good for you. Especially the chunky ones. The chunks in the soups in effect clog up your stomach for a little while, so it releases its contents more slowly into the small intestine. That’s good; an intravenous-style drip of good food is better and helps reduce the blood sugar swings. It lowers variance!

I hope these pointers are useful to you. This is general information that may not apply to your specific situation. Consult your healthcare provider before making any drastic changes.