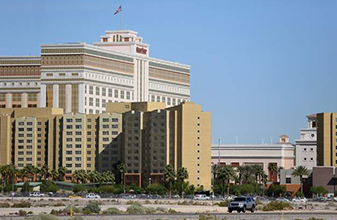 It's about two years after this sordid incident, but still nothing has been done, according to reliable sources.

It's disturbing that some casino executive authorized these hapless casino guards to have real guns, especially in light of the recent guilty plea to manslaughter of a patron by a security guard at Eldorado Reno (see Growl directly below this one). It seems that just like in their never-ending abuse of skilled patrons, the casino industry just will not learn to rein in the security thugs. The lawsuits will continue to pile up.

The South Point idiot who fired the shot has already learned from Las Vegas police who usually use the “I was scared” excuse for maiming and killing. Shame, shame on the South Point for letting guards have guns. This cowardly guard should probably be fired, and perhaps prosecuted for attempted murder. If he was so “fearful,” all he had to do is run away. If letting these bozo guards have guns didn’t endanger the public so much, it would be laughable. I hope the public will stay away from South Point until they stop this idiocy.

It is puzzling and interesting to note that apparently Metro has clamped down on information it will release about this incident. So far, Metro has not publicly identified the two arrestees and their charges. No word if the guard was one of the people arrested. The entire story needs to come out, not just the scant information that was available when the R-J article was written, so the public can assess what level of danger it has been subjected to by the apparently stupid actions of this guard. There might be circumstances under which the shooting was appropriate. But if information is hidden from the public, we can only assume the worst — that it is as it appears.

UPDATE: After inquiry was made, Metro stated that there are no dash-cam or body-cam videos of the police response to the incident. This is hard to believe, because "shots fired" calls typically draw several cars and officers; not one of them had their cameras rolling? Amazing.