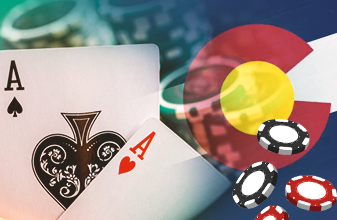 Colorado voters overwhelmingly approved Amendment 77, which removes the $100 state limit on wagers at casinos and allows the introduction of new games. Going back, casino gambling was approved for three mountain towns -- Central City, Black Hawk, and Cripple Creek -- in 1990. All three towns are just a short drive from Denver.

Part of the money to go toward preservation of historic sites in these towns. But Black Hawk now looks like a tiny Las Vegas. A store clerk in Central City agrees with that assessment. “You know the big marquees with the big flashing lights; that’s not keeping the historical integrity at all.”

David Farahi is Chief Operating Officer of Monarch Casino. He says each city council will decide the games and limits. “To increase the kind of fun people can have ... because hopefully limits can go up and we can add new games has got us excited.”

At present, most people who visit Colorado’s gambling towns like Central City are not big spenders. Said a self-described small time gambler: “The vote doesn’t affect me much because I make minimum wage. Casinos are a little bit of a treat. I put a little bit aside and when it’s gone, it’s gone,” she said.

There is some civic good. New games and bet maximums will mean more money to sustain the three small towns. The city councils in each of the mountain towns involved must give their approvals to the changes in the rules, which are expected to take effect May 1, 2021.

Colorado residents spend hundreds of millions of dollars in out-of-state casinos annually, according to a report commissioned by Monarch. Farahi doesn’t think people will stop going to Las Vegas, but says the state’s casinos could take a bigger slice of the gambling pie. Of course, that’s good for the bottom lines at casinos, but it’s also good for jobs and the economy, he said.

“The person that goes to Las Vegas (several) times a year — if we can get them to come to one of Colorado’s three gaming towns one or two or three of those times — it keeps the dollars in the state, “ he said. In addition, Colorado hopes to attract more casino-visiting tourists from out of state. With all three casino towns just a short distance from popular Denver, they are an easy flight from many locations.

Card counters and other types of advantage players may find Colorado to be a worthwhile addition to their rotation of communities. Up until now, the tiny stakes permitted at the casinos has not made it worthwhile to visit Colorado for most AP’s.

Unknown, however, is how many casinos will actually increase table maximums to an amount worth travelling to play, and what game protection measures might be invoked because of higher maximums. Similar bet restrictions were removed in Deadwood, South Dakota, but few casinos increased their maximums to a worthwhile level.

The state’s restrictions have loosened over the decades. In 2009, the limit on individual bets was raised from 1990’s original $5 to the current $100. Last year, Colorado voters made sports betting legal.

Jeremy Fey, the mayor of Central City, says most of the operators in his town are smaller, and less affected by the rules. He doesn’t see them changing their rules right away — because it costs money. “Little costs of changing the little placards on all the tables, getting new machines, all that stuff — there’s an upfront cost in that that I don’t believe, in talking to our operators, it will be worth it to them right off the bat,” Fey said.

Black Hawk, home to the largest resorts with the deepest pockets, is the city most likely to see immediate effects. The impact for the smaller towns would likely be slower.

Detractors say opening the door to unlimited betting could create more problems than it’s worth. High-stakes betting could lead to a higher rate of problem gambling in the state, said Jeff Hunt, the director of the Colorado Christian University’s Centennial Institute, a conservative think tank.

“People could be losing unlimited amounts of money, jeopardizing their mortgage payments, their healthcare payments, their college payments,” Hunt said. The impact of previous limit increases hasn’t been closely studied in Colorado.

The potential negative effects could extend beyond the boundaries of those tiny mountain towns, Hunt said. “This is going to spill out into the community, and we're gonna have to deal with the social consequences of this whether you live in the three mountain communities or not,” he said.

Cripple Creek, a city of roughly 1200, is the most populous of the state’s three gaming towns. The local community supports the measure, said a local official. The casinos are a major contributor to the town’s economy, he said.