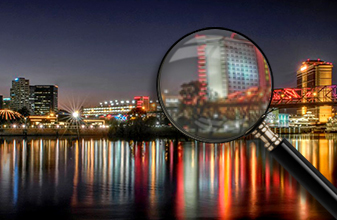 Casinos in Louisiana frequently hire uniformed off-duty local police officers to provide security, especially for special events where larger than normal crowds are expected. Many players from other jurisdictions may be unfamiliar with off duty police working as casino security. You can rent a cop in Shreveport - Bossier City for about $25/hour. The casinos take the position that the cops are independent contractors and not employees and therefore they have no liability or responsibility for the cop's actions while working as extra security. At least one casino in Louisiana refers to the practice as having a "law enforcement presence" on the premises.

Louisiana has two very nasty laws that the police and casinos use to abuse patrons who are targeted by casino personnel for whatever reason. The first is La. Code Crim. Proc. Art. 215.1A, which provides that a law enforcement officer who has "reasonable suspicion" that the person has committed or is about to commit a crime may stop a person and demand that the person identify himself by giving his name and address and an explanation of his actions . Police officers, naturally, believe that law entitles them to demand to see written identification although I believe the statute only requires an oral response [the Supreme Court's decision in the Hiibel case several years ago does not provide clear guidance on this statute]. I know from personal experience that many officers believe that they have a right to demand written identification from anyone in a bar or casino even without having reasonable suspicion of criminal conduct [that is probably a confusion of the right to check ID for underage drinking or gaming]. Regardless, the officer does NOT have to have probable cause to stop and question you - the test is the much lesser standard of reasonable suspicion. Trust me, the casino suits will tell the cop that they suspect you of some scheme to defraud the casino if they want to stop you and that probably is all that it takes and all that the cop needs to stop and question.

The second statute is the crime of "resisting an officer". La. R.S. 14:108 Note that the statute is broader than "resisting arrest". Thus, if a person refuses to stop and provide the information requested under the first statute, even if the officer does not have probable cause to arrest you but only a reasonable suspicion that you may have done something wrong (which suspicion will often be supplied by the casino suits alleging some trumped up charge or claim such as suspicion of "theft" or disruptive behavior), the officer can still arrest you for "resisting an officer" and then work with the casino to "back room" you and later take you to jail and book you on charges of resisting an officer. In short, you can be arrested in Louisiana if you attempt to "walk away" when confronted by a uniformed police officer even if that officer does not have probable cause to arrest you for anything.

Remember, many security officers in a casino wear uniforms, so you need to be careful about distinguishing a security guard uniform from a police officer's uniform. You have the right to walk away from the uniformed security officer although you may not have that same right with a uniformed police officer. Stated differently, the first you can walk away from with impunity, while the other you walk away from at risk of being arrested for "resistance" and then "back roomed". Compounding the problem is that many Louisiana casinos are "river boats" where there is only one exit/entrance to and from the boat that patrons are funneled through. A practice used by some casinos is to ask you to leave, knowing that you will have to go through the "funnel", and then have their off duty uniformed cop stop you at the end of the ramp where the pavilion begins. You are then "conflicted" -- on the one hand, the casino has asked you to leave and you are complying with its request. Yet, now you are being told to stop by a cop acting at the direction of the casino to "stay" instead of leaving, and which we all know is intended to allow the casino to identify and trespass you using law enforcement to do the job. It is indeed a disgusting practice and probably a violation of civil rights but good luck proving that.

Your safer course if confronted with this situation is to stop, ask the cop why he stopped you, ask him what his suspicions are, and orally give him your name and explain that you are leaving the casino since a casino employee asked you to do so. You really are not required to give any more information or answer any further questions. Do not attempt to walk around the cop or ignore his requests or you run the risk of being arrested for resisting an officer. Be aware that many moonlighting "good old boys" like to inflict pain when effecting an arrest and welcome any excuse you can give them to cuff you tightly.

Even if you stop when asked to do so by the cop and are still arrested you will have a better civil case (should you choose to pursue it) if you can testify truthfully under oath that you were compliant with all requests and demands. If you are with other people, hopefully they will accompany or follow you as you leave and can be witnesses to what happens. Do not count on surveillance video to back you up since such video has a habit of getting lost or corrupted in Louisiana. A recording device that is activated or a cell phone video would be a great help. Remember, the surveillance video will not have sound even if the casino produces it so video will only tell a part of the story.

To all of those willing to game in Louisiana and assume the foregoing risks to their civil rights, Laissez les bons temps rouler. Good luck to the intrepid, both at the tables and leaving the tables.

Now for the usual disclaimer; the foregoing is presented merely as observations and friendly suggestions by your humble barrister. It is not intended as legal advice or as a legal opinion as to anything and it should not be interpreted as such, especially since your barrister is not admitted to practice and does not regularly practice in Louisiana, which, as a Civil Code instead of a common law jurisdiction, is considered a world unto its own in legal circles.