Rude awakening: Is card counting worth it? 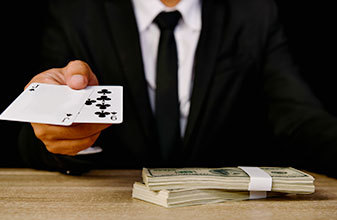 Inquiry: The more I read and know about the card counting profession, the more depressed I become. Why? With all of the backoffs, backroomings, false charges, etc., how are advantage players coping with it? Is it worth all the trouble? Or, are you guys just thrill seekers being the little mice chased by those big casino cats?

At first, what captivated me was the allure of free RFB, vacations, traveling, and at the same time making money. But it’s not all that simple. Is a regular career a better choice?

Cougfan: To make any real money at AP, you need to be smart, observant, and personable. You also need access to significant bankroll and possess nerves of steel. In other words, if you have the skills needed to make significant money at AP, then you probably could make a lot more money by focusing on some other line of work.

I make a decent living at my day job. I play blackjack and other casino games because I enjoy the challenge. On a per hour basis after expenses, I make less than 20% of what I make in my primary profession.

If you are looking for a nice diversion / hobby from your business, then AP might be a good answer, but I wouldn’t encourage someone to do this as a primary source of income.

I will say this, however. Don't stress about backoffs and the like. If you are just counting, then it will almost always be limited to a tap on the shoulder, being asked to step away from the table, and being told that you are welcome to play any game other than blackjack. The pit critter is usually more scared and nervous than intimidating. If you are really worried about harsh treatment, then don't try to play blackjack after a back off, and avoid playing at casinos on foreign land, especially Indian casinos.

The Chaperone: I don't agree with the "anyone who can make a living as an AP could make more doing something else" canard. Not everyone is cut out for the "real" world or "real" jobs. Personally, I can barely get out of bed before noon and if I have to do so on a regular basis, it’s a real hardship. I also have an immense disdain for authority which made school and later work difficult. Both of these qualities are huge negatives for "real" jobs, but are actually positives for life as an AP.

There are many AP’s who are anti-social, autistic or suffer from some other disability or disorder which makes life in the real world difficult.

Cougfan: Why are you comparing AP vs working for someone else? I was thinking that the typical AP would make a great entrepreneur. Technically, they already are an entrepreneur, but I'm saying they could make more money by changing to a different line of business.

Remember, a successful AP already has access to a significant amount of capital, among their other traits.

As for the hours they sleep, if this is really a concern and an AP, who by definition is motivated and isn't afraid of a challenge but just can't change their lifestyle enough to wake up a little earlier, then just move a few thousand miles west and stay on your old time zone in your head.

Young Blackjack Player: I'm at that stage in my life where I hold a 3.65 GPA in my second year as a STATS major (with a minor in ECON), but I'm starting to get worried about my life in the real world, outside of the protective barriers of a university.

Unlike The Chaperone, my issue isn't the waking up at a civil time, but in normal hours at a 9-5 job. The only job I can think of that I would like to do those hours would be AP blackjack. I just don't have the passion to do a desk job 40 hours a week. Even my professors have noticed me day dreaming about blackjack and have suggested I take a semester off of school to run around Las Vegas for a semester, then come back refreshed, money in pocket, and refocused on math and stats.

I too have a huge issue with authority, from tenth grade to present -- I get chastised by many people for my brutal honesty. The few places I get away with it is when I'm talking to my executive board for the sport I specialized in as a teenager. In my senior year of high school, my grades dropped by ten percent due to my fascination with blackjack. My teachers told me that I need to choose; one referenced my current situation with the main character from the decade-old movie 21. I squeaked through my senior year with a mid 70% final mark while turning a tiny bankroll into a modest one.

Thank you to The Chaperone for the advice with regards to which road to head down. It's sort of comforting knowing I'm not the only individual who has had to make this life altering decision.

The Chaperone: Cougfan misunderstood about the sleep time. It's a biological thing. Everyone's clock is set by the sun. Some people get tired when the sun goes down. Most people get tired a few hours after the sun goes down. I get tired when the sun starts to rise. I think everyone would acknowledge that some people are “night owls” while others are “early birds.” The next step is understanding that the distribution is like a bell curve and there are people at the extremes. From what I have read, there is a small minority (~1% of population) that are even more extreme night owls than I am.

As to your suggestion, if I go to a different time zone, my body adjusts to its “normal” sleep schedule in a couple days just like anyone else would. It's just that my “normal” is not your “normal.”

I have considered trading stocks in the Asian markets as a profession, but it's not something I'm terribly interested in. My sister lives in Japan and we keep the same hours, lol.

Lonesome Gambler: A career needn't define the individual. Although advantage play is a big part of my life, it's not the whole picture of who I am. I don't need to work a 9-5 job to feel like I'm contributing to society, and indeed I have little tolerance for that lifestyle. I accomplish the feeling of contributing in other ways.

I don't doubt that many AP’s could make more money in another (maybe more "respected") field, but would they be as happy doing it? Don't remind me that I said so while I'm in the middle of a playing session, but money really isn't everything.

Baddog
July 21, 2019 12:12 pm
I started life at IBM - went back to law school and did well with a career as a trial lawyer. Many good careers are out there. It may take a bit to find one. Good luck.