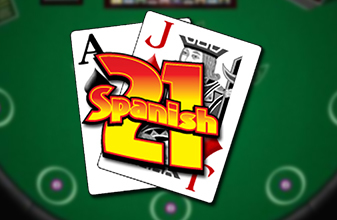 Spanish 21 (SP21) is popular in the Pacific Northwest, arguably more so than the standard mediocre blackjack offerings in the same card rooms/mini-casinos. I find myself wondering why and then thinking about the other blackjack variants being introduced and their potential. I view SP21 as a successful blackjack variant as it has stood the test of time and it is not at all unusual to find more players at SP21 than the real thing at the adjacent table. Why? Interestingly, I think part of it has nothing whatsoever to so with SP21. I believe a big part of its appeal is the silly Match the Dealer side bet! Many ploppies seem more interested in the side bet than their SP21 hand! I believe that even though the house advantage ("house edge") for SP21 is lower than that for blackjack, the typical ploppy probably plays at a bigger disadvantage at SP21 than they do at blackjack simply because basic strategy is much more complicated. Yet they play anyway, presumably for the side bet.

Many other blackjack variants have been introduced, some succeeded by casino standards, most have failed. Better-known ones include Blackjack Switch, Triple Attack Blackjack, Free Bet Blackjack, and Super Fun 21. Are these fads or do they have lasting power? My sense is unless they give the player more for their money than normal blackjack, they are probably just a fad and will either fade away entirely or be relegated to a table here and there. To give a player a better experience than the typical blackjack game I think the house edge needs to be lower and/or the game needs to be more "fun" in some way.

Does this explain the lack of published work on these games? Have a few AP’s done the work to develop a positive EV approach to playing them and are understandably keeping it to themselves to limit competition? For example, I have looked for AP strategies for Blackjack Switch but I haven't found anything. Yet the game has been out for several years. I have reason to believe it is beatable but I don't know how. Katarina Walker’s book let the cat out of the bag for SP21 and demonstrated that, although inferior to blackjack, SP21 was still beatable. Folks promptly grumbled about the information being disseminated in the public domain amidst fear the casinos would tighten up. Thoughts? Comments?

Shark: Ploppies don't care about the house edge. You can see them play on a double-zero roulette when the single-zero wheel is empty. They play 6:5 “blackjack” when there is 3:2 blackjack available. Besides, as a game developer, your customers are casinos. It is a hard sell to market a game with a lower edge than the games they currently have on the floor when their best customers don't care.

Ploppies like options. Optimal-strategy house edge is almost irrelevant. The more options you give ploppies, the more they are violating optimal strategy and thus the more the house wins. James Grosjean has written extensively on side bets, but the information is not widely available. Arnold Snyder did some work on Blackjack Switch. You can find side bet analysis at discountgambling.net.

MBlackjack23: With the case of SP21, it's understandably the more popular game when looking at the demographics in the area. Those local degenerates love that Match the Dealer. Knowing the playing culture, whether they are being killed by the house edge or not is little relevance considering the cardrooms there offer low limits to keep people playing longer, and with the options to keep a gambler occupied with ACTION! Action is the key here I believe. I'm very familiar with playing in that area. One of my favorite methods is utilizing surrender on a blackjack table, on a dealer that just got done dealing on a SP21 game.

As for finding the published work for variant games, I don't think they will be easy to find. Especially after seeing games tighten up exponentially fast the last few years. Best to know how to write code and create your own strategies.

Ploppies like stuff that can potentially pay off big, doesn't drain their bankroll quickly and has some degree of suspense. The 9:1, 12:1, or 13:1 payouts for a suited match are big enough to be exciting. With the ability to bet the match on both the up card and the hole card, at least one of these bets is expected to return something approximately once every three rounds. The suspense comes from scanning the entire table as cards are dealt, identifying the most common rank to root for, and waiting for the dealer to show the up-card. Flipping the up-card is analogous to the final reel on a slot machine clicking into position.

There are a number of side bets that do not have the same appeal or get much play. Lucky Ladies is a solid example. It has the big payouts, but even the smaller payouts are infrequent. The huge house edge wipes out the ploppy's bankroll quickly. Lastly, unless your first card is an ace, nine, or ten, you've lost the side bet. For about 2/3 of the hands played, there is nothing to root for and no suspense after the first card is dealt.

As far as publishing AP information on blackjack variants, I saw first-hand how damaging a book can be to a game. I expect I was one of less than a half-dozen people to be playing SP21 before Katarina's book was published. I found some very limited information online, ran many of my own numbers, and shared information with the one other person I knew at the time who was also playing the game successfully. At the time, the game could be played aggressively with no heat. Within a year of the book getting published, the heat started getting turned up on the game, and today, there is little to no distinction in heat levels between SP21 and blackjack. When the book came out, I was glad to have the means to validate some of my own research and numbers on the game. However, the benefit of checking numbers did not compensate for the negative impacts of having the information available to everyone. Even though few people have bought the book and even fewer have successfully played the game in the casino, the mere existence of the book was enough to create paranoia in the casino industry and ruin an opportunity for the select few who put in the hours to do their own analysis.

Information undoubtedly exists for the other blackjack variants that are out there. I expect that some of the variants are playable, but others are a waste of time. For the playable variants, I think we can expect that a small handful of AP’s have analyzed the game and are keeping the information to themselves or their closest colleagues. This small group of folks will reap the benefits of their hard work until someone spills the beans and publishes the information to the masses.

21forme: It’s different in the east. SP21 was heat-free in Atlantic City and Connecticut for 3-4 years after the book was published, but not anymore.