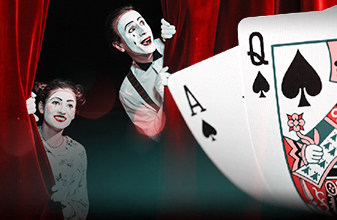 Speaking with a relatively new medium/high-stakes advantage player, I suggested that he walk around high-limit rooms and observe heavy black-chip and purple-chip players. What do they act like, what do they dress like, and how do they carry themselves in the casino but away from the tables?

Your personal act in a casino should have something in common with your natural behavior (to create consistency -- I'm assuming most advantage players are not professional actors), but to be believable and to avoid standing out, your behavior should be informed by how other players betting at your stakes behave. Try it sometime -- the results may not be what you'd expect.

I'm firmly in the "shut up and play" camp. When I play with a big player in a city that isn’t a major tourist destination, I ask them what their cover story and explanation for what they're doing in town is. Here's the catch: none of this stuff should really come up at the table unless you're being directly grilled and answering is preferable to just ignoring it.

When an actor prepares for a role, he or she might write a short "biography" of their character (this is also used in the writing process when developing characters) that will include all sorts of details: where this character grew up, what sports they played in school, what their favorite food and color is, where their parents met, what their first job was, etc. This is not done so that the character can blurt out their favorite food in the middle of a scene -- it's so the actor can create a consistency in their actions -- their behavior is informed by rich details about their character's personal life.

If you're playing blackjack or another beatable game and you have the urge to put on an elaborate "act," try internalizing it instead. See if you can play the part of the normal casino patron who plays at the stakes you play (based on the aforementioned observations) and only use the details of your act in the way that a writer or actor might use the details of a character's childhood. If a question about your character comes up in conversation and needs to be answered, you'll be prepared. But you won't be the guy firing up the bullshit detector by awkwardly telling your fake life story to an audience that doesn't care.