Tipping is for losers 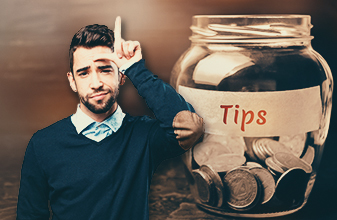 I was playing blackjack recently with one other player at the table, who was betting $25/hand, and playing $5/hand for the dealer after every win. He played for about an hour, and must have tipped at least $100. Talking about "bribing the dealer," blah blah blah -- imbecilic blackjack humor that only the dealer will laugh at because he's the one collecting the dough. When he left the table,the ploppy was down about $400 for that session. I usually don't pay attention to other players, but this guy was tipping so much, I wanted to know how much he ended at.

Shortly thereafter, another player joined -- he won $250 in about 15 minutes, and tipped $25 to one dealer and $50 to another when he colored up and left. He effectively threw almost a third of his winnings into the trash!

My point is this: If you think your $1 tips are going to get any goodwill, or your occasional $5 tips will make the dealers react favorably you, get a clue. These dealers get so much in tips from ploppies that your occasional tips will be considered cheap considering your win, or be totally forgotten and lost from memory almost immediately.

And if you tip enough to make these dealers actually appreciate it, then you will have to tip away most of your EV. Your edge is so small counting cards, and variance so high, that players are lulled into a sense that blackjack is easy money when they are on a good run, and will feel that tipping $50 from a $2000 win is nothing. But that could be half your EV for that session of play.

The truth about tipping is that tipping nothing is better than tipping small. If you don't tip anything, they will think that you simply don't tip, or think you may have tipped already to another dealer. If you tip small, they will know that you are a cheap tipper, and think you are a scumbag for tipping so small after such a “big win.” Dealers are in their own little world; don't think that they think like you think, or think like a waitress, who’s used to $2 or $3 tips. Dealers are used to tip addicts who ooze tips at the slightest win. They will take your "small" tips after a win as a sign of contempt, rather than appreciating it. It’s better to give dealers nothing and take contempt (probably much less than if you give them a small tip) than to give them money and still have to take contempt.

Tipping does not equal being nice

I am always a nice guy at the table. I am friendly to the dealers and will make small talk, but not too much because it bores me. But I do not tip. If you are tipping, the dealers may act like they appreciate it, but when they talk to other dealers, they will still think you are a cheapskate who won all this money but only tipped a few coins.

You can never satisfy the dealers

Unless you are a degenerate tipper, you will never satisfy most dealers. For some stupid reason, many dealers feel like they're the reason you're winning. And tipping after losing is just overtipping, even in the eyes of ploppies.

Sure there is a negative social impact for not tipping at a casino, but my main goal in playing blackjack is to win money, not to win brownie points from people I don’t know and don’t care about in the least. And tipping small doesn't reduce heat. In fact, it could increase it, as the dealers will just be disgusted that you tipped so small, and will expect future tips. If you are known for not tipping, then they don't expect it anymore.