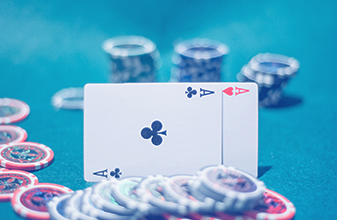 In my first appearance there in a long time, I recently played a few minutes of blackjack at an infamous sweatshop on the southern end of Las Vegas. The sweatshop atmosphere was stifling, even by Las Vegas standards. "Checks play" is called out for a mere $100 bet, or "black action" for a single black chip. A single black chip played also triggers a call to surveillance, too. Once identified as a "black action" player, you get your own personal pit critter for the duration of your session. Despite this "VIP" treatment, I was able to extract a few hundred dollars before I quickly departed. I doubt if I will return. I respect anyone who can play there for anything above chump change.

Though all personnel were pleasant and professional, the tense mood of the pit must serve to run off many ploppies in addition to whatever few brain-using patrons might bother to drop in at this place. It's a shame, because its renovated facility is beautiful. Too bad all they apparently want is red-chip action.

bigplayer: It’s typical Las Vegas paranoia. At most places in Las Vegas, even some supposedly sophisticated large Strip casinos, it’s truly reached rock bottom in terms of the entire town turning into a giant, paranoid sweatshop. Every card counter should be picky about when and where they play, especially in the current environment. Fortunately, this sort of thing tends to run in cycles and eventually casinos drive so much business away by being paranoid that the managers all get fired and new ones come in. Pure randomness means that some of them will have a more intelligent attitude.

I'll say it again, the casinos that make the most money are the ones who protect their games passively with mediocre penetration, non-continuous shuffle machines, great rules, mid-shoe entry allowed, high limits, and incredible tolerance of bet movement.

Wisereyes: The most well-known casino proponent of this philosophy in its most radical form is casino consultant Bill Zender. Bill's influence is easily identifiable to seasoned players. Though Bill's recommended tactics are easily quantifiable and proven, they are still rare in the industry. The phrase "educated fool" applies here. And let's not be too unkind to the casino industry; the world in general is full of educated fools, too.

My corporate experience prior to advantage play demonstrated that less than 10% of professionals -- probably less than 5% -- have the guts and strength of character to make appropriately tough decisions, especially when those decisions go against prevailing conventional wisdom. In other words, despite education that would objectively tell them otherwise, they are more inclined to play it safe. That's why it is so easy to get ahead in the world; professionals manage their work life and career with a safety net, and that's being polite. And because the rest of the world does the same, they can still get by.

The appearance of a casino manager who makes an ostentatious display of being tough on advantage players while concurrently chasing away legitimate ploppy high rollers with poor rules and surly pit comportment can often keep his/her position and even advance because the industry is made up of the people in it; gutless men and women that unconsciously aspire to mediocrity by ignoring facts and their own education, while embracing voodoo and superstition. Bill Zender is an exception to the spineless, yellow-belly casino behavior that has the industry, like a fish on dry land, making all kinds of motion, but floundering when it should be thriving. It's not unusual for Zender-consulted or influenced properties to deal down to 1/2 deck on a six-deck shoe.

Zender's books are must-reads for the advantage player and casino employees alike. For those not inclined to spend money on self-improvement, many of Bill's articles and papers can be found online.

bigplayer: I agree with Zender, if you're going to hand shuffle, you might as well deal it deep, because speed and economy of motion will make far more profits in the long run and simply dwarf what any individual card counter can take out of the game. From my perspective as a player, I think passive protection of games is better than actively, aggressively trying to protect games. Solo counters would be able to play and casinos would make no mistakes in backing off civilians, and the casino can then have surveillance looking for actual cheating, stealing, and procedure violations instead of them trying to do marketing’s job for it by attempting to determine the profitability of players, and then attempting to justify that by calling it “asset protection.” The real threat to the casino bottom line isn't card counters, and it would be an attractive goal to kill the cottage industry that has arisen around the issue of protecting casino assets by pseudo-criminalizing skillful play.

Voljack: While playing, I was lending an ear to the laments of a dealer and pit critter regarding micromanagement from their casino’s new consultants. As you would guess, the changes had little to do with improving profit or customer satisfaction.

FelixWill
August 30, 2020 11:59 am
Very interesting info, thanks ! I am big fan of gambling game ( I am playing with self control and limits ). Gambling for me is like a hobby which gives me the possibility to forget about stress from work. I want to suggest <a href="https://ign88.co/id-ID/Games/PpsGames">ign88.co</a> , it is also a nice online casino platform, you can check it. In such things as casinos or betting is very important to have a rational mind and self control and to do not take everything to close to you.