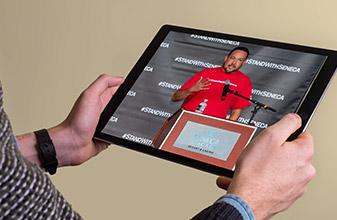 The Seneca Nation of Indians' president stated recently that he is seeking a "fair, new" gaming agreement with the state of New York.

Seneca Nation President Matthew Pagels, when pressed for more information after a press conference outside Seneca Niagara Casino in Niagara Falls, said the gaming industry has changed "drastically" in the 20 years since the Seneca Nation received exclusive permission from the state to run three casinos in Western New York.

Pagels noted that the operations of the Seneca Niagara, Buffalo Creek, and Seneca Allegany casinos have been impacted by the growth of casinos in New York outside of the country's exclusive jurisdiction. He noted two more recent casinos that were opened with support from state lawmakers, including the Del Lago Resort & Casino in the Finger Lakes and the Tioga Downs Casino Resort, which is situated in Nichols, roughly midway between Binghamton and Elmira.

Advantage players, including card counters at blackjack, are wary of playing at Seneca properties, as the casino employees are quick to expel skilled patrons.

The Seneca Nation's gaming operation has been affected by the growth of online, gaming whose development has recently been supported by New York state officials. “We’ve definitely seen an impact on brick-and-mortar sites,” Pagels said.

He recognized that, like the casino industry, what the Nation agreed to under the existing contract has "materially changed." Pagels resisted answering the question of whether the Nation would begin talks anticipating having to pay the state less under a new gaming deal. He explained, “It’s a negotiation process. To say we’re expecting anything is too early.”

The existing agreement will end in December 2023. Pagels claimed that although the Nation and state representatives had met to discuss a prospective schedule for discussions, no specifics had yet been addressed.

Despite an aggressive move by Governor Kathy Hochul in April, who forced payment of past-due slot machine revenues by invoking state debt law to freeze the Nation's bank accounts, Pagels had an upbeat tone and kept using the word "optimistic" when asked how he felt generally about entering into negotiations.

According to a representative for Gov. Hochul's office, preliminary talks with the Seneca Nation have already started between staff members of the executive chamber and the state gaming commission. The governor's office issued a statement saying, "We are confident that the process will move forward in a way that best benefits New Yorkers."

Following the news conference, Pagels spoke to the media along with other Seneca Nation representatives to commemorate the 20th anniversary of the signing of the current agreement, which became effective on August 18, 2002.

Seneca leaders, casino employees, and supporters spoke during the press conference about the effect that the nation's casinos have had on the local economy over the previous 20 years. More than 3,000 people are employed by the three casinos operated by the Seneca Nation, including about 1,000 in Niagara County.

When costs associated with construction, vendors, and other facets of the gaming industry are taken into account, they also claimed that the Nation's gaming operations have had a cumulative economic impact of more than a billion dollars across Western New York.