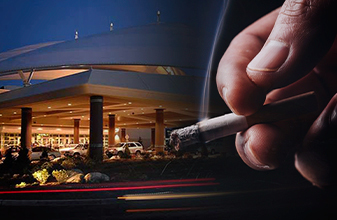 Smoking was not allowed inside Rhode Island’s two casinos during the worldwide pandemic, and now casino employees are urging the state’s legislators to enact a permanent ban.

A bill in the Rhode Island legislature seeks to repeal the special exemption granted to casinos in the existing state law that prohibits smoking in public places. Casino employees from Bally’s Twin River Casino in Lincoln, RI and Bally’s Tiverton, RI Casino are visiting lawmakers to request their support of the bill, which has been “held for further study,” usually a legislative graveyard.

A Bally’s spokesperson said that Bally’s Corporation would address any employee objections at the bargaining table. She said they have concerns about the proposal and already make accommodations for nonsmokers.

In New Jersey, dealers in the Atlantic City casinos have been asking their lawmakers to prohibit smoking in casinos for more than two years. New Jersey Gov. Phil Murphy has said he will sign a bill banning smoking in the state’s nine casinos if the Legislature passes it.

Twenty states require casinos to be smoke free indoors, including nearby Massachusetts, and there are more than 150 smoke free Indian gaming venues, according to the American Nonsmokers’ Rights Foundation. Nine states still allow smoking indoors at casinos, though areas within Indiana and Louisiana ban it and two of the three biggest casinos in Pennsylvania operate smokefree voluntarily, the organization said. Nevada of course continues to allow it, and is likely to continue doing so, because of the casino industry’s heavy influence in all levels of government in the state.

A table games supervisor at the Tiverton Casino in Rhode Island reported that her health improved when smoking wasn’t allowed under the state’s indoor mask mandate. When the mandate was lifted and smoking returned, she said she soon began coughing and getting headaches, which she attributes to secondhand smoke. “In one week I saw my life deteriorate,” she said.

Most casino advantage players, including card counters at blackjack, are in favor of a universal casino smoking ban, as they spend many hours in casinos as well, and suffer similar negative health effects.

“I honestly believe it’s cruel,” said a Democratic Rhode Island legislator. “They had two years of a smoke-free workplace. And just to be thrown back into a smoking environment like that without any consideration of the health implications to the workers, it only compounds the insult to injury that they’re experiencing.”

The Bally's spokesperson said employees can request to work in the nonsmoking areas of the casinos, smoking is no longer permitted at table games and the casinos have “advanced ventilation systems.” She claimed that smoking returned after the indoor mask mandate expired because the casinos have accommodated smoking and nonsmoking guests for a long time and guests seem to appreciate that policy. “We went back to accommodating smoking and nonsmoking guests, with some guardrails in place,” she said.

There is no safe level of secondhand smoke exposure, according to the Centers for Disease Control and Prevention. The American Society of Heating, Refrigerating and Air-Conditioning Engineers has said that current ventilation and air cleaning systems cannot control or significantly reduce the health risks of environmental tobacco smoke.