Harassed by pit for not tipping 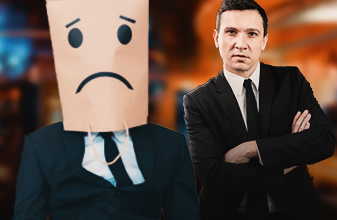 I am not normally affected by this type of badgering from dealers, pit critters, nor ploppies. But this time, a critter was aggressive and obnoxious, worse than anything I'd experienced before.

I was at a local casino that’s an acutely low-roller place. I hadn't played there in about two months. I sat down at the $5 minimum six-deck game, which is a pretty good game with great penetration. Given the small action normally seen here, I bought in for only $500. It was a slow time of day; there was just one other player and me against the dealer. For the first 2.5 decks of play, nothing significant happened. Then lo and behold, the count went through the roof -- from three decks on, the hi-lo true count never went lower than +3. So I then employed my max bets for this game. Several interesting hands happened -- I lost some but also won a good number of them. By the end of the shoe, I was up $600 (since I had lost several early max bets, at my lowest point I was down almost $500). At the end of the shoe, while the dealer shuffled, I was sitting there with $1100+ of mostly green and black chips, in this low-roller joint.

The pit critter came over to take a look, and the whole time the dealer shuffled, he was firing comments at me non-stop:

"People act like they don't know the dealer also has to make a living..."

"Got all those black chips, and can't even tip the dealer...."

"I don't understand why some people are so ungrateful..."

There were a couple more comments that I can't exactly recall, and he would not stop. I did not feel uncomfortable at all; I kept my cool, even laughing inside. But in order to make this the least memorable, especially since I already had a nice win for the dump I was in (mind you, in just one shoe), I bit my tongue and didn't reply. I thought of writing a “customer feedback” note and dropping it in one of the boxes they have but resisted the temptation in exchange for coming back later and keeping on milking this place. As far as actual heat for my bet spread (I use a large spread here, more than 1-20), I have never been backed off nor suffered any harassment before this harangue.

"So, when I'm losing badly right here at this same table, who's going to tip me? Can I depend on you doing that?”

"Yes, the dealer has to make a living too; maybe you should put in a good word for her to get a raise.”

What would have been your comments to this jerk??

85: What a terrible attitude. That’s probably the reason he’s in a lousy-paying job at a dump casino. I would have found it hard to bite my tongue but if the game is good, I wouldn't want to make a scene. What if you had intentions to tip when you leave instead of as you go? What a douchebag. I wonder how many customers he has lost for his employer.

Ikthor: You did well to take the high road. Most likely the guy is just an unpleasant person who hates his job working in a low-stakes sweatshop. There's no value in responding to him directly. Take a quick restroom break during the shuffle, or pretend to make a phone call/send a text message.

You rarely win by causing drama or a scene. Of course, we are humans and it's all situation-dependent. Rated/unrated? Known regular vs. 100% unknown, etc. It's certainly best to ignore him and possibly best to leave the game until he's gone from the pit.

"No tipping; dealers are overpaid"

Mjwbigred
December 5, 2019 10:23 pm
I would have told him to get the casino manager and relayed to the casino manager that it is because of employees like the critter that people don't come to that dump. I also would let the casino manager know that I would be contacting the owner of the club or majority shareholders to convey how there investment is not being looked after properly. This usually works to at the minimum get a letter put in the critters file. I would then say to the dealer in the presence of the GM and the critter that I usually give half my winnings to the dealers at the end of my sessions since it is a collaborative effort, but not this occasion because of the critter. And state that the critter should pay the dealers their lost wages. Every casino, racino, or private club I go to, I make sure I know who is who there so that if I have any problems I can name drop. But make sure that you know what those people look like and if they are at the club. Your next visit to that club would have been much more cordial if you had and would more than likely even get rated higher than your normal play. It happened to me on occasion and I was able to capitaluze on it.