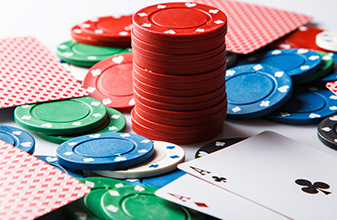 On a recent blackjack trip, I'm fairly sure a dealer was dealing seconds at an Indian casino. His drawing action for the up card covered the whole deck for a brief moment, and his up card was a 10 or Ace probably 80+% of the time. I expressed my incredulity and kept commenting on how improbable it was that that was happening. As he left the table, he smugly said that with the new dealer we wouldn't have to play against as many 10’s.

Pig Barber: By just dealing seconds, I don't think he could make the up card 10 or Ace more than 80% of the time. If dealing thirds, fourths too, he could. Ploppies and dealers at Indian joints are always talking ploppisms about some dealers being "hot" and others not. So I don't see his comment as being any evidence of being a mechanic.

I learned to deal seconds, in a seventh grade "extra credit mini-course" about stage magic. I put in probably 20 hours of hard practice to learn a group of card tricks with the second deal at the core of the trick. I enthralled my nieces (my 15-year-older sister's kids) with the trick, every year, up until about when they turned 30.

22 Dreams: Learn how to deal seconds yourself and you’ll have a much better chance of being able to spot it. You don't have to master it. It only took me a few hours of practice before I could fool novices.

The left thumb has to stay on the deck. Try looking at that. The sound? I don't know if you can hear it with all the other noise in a casino. Study the motion of other dealers and compare them to the guy you suspect.

You can check out Bill Zender's book, How to Detect Casino Cheating at Blackjack. There are good videos online (and some horrible ones) on how to deal them. After I learned, I was convinced what I'd experienced was negative variance, not seconds.

As Pig Barber noted, dealing seconds would not be a likely reason for having a T up more than expected. Dealing seconds is more useful for reserving a top card for a situation that will either help a confederate or hurt a mark. The second card is usually an unknown, essentially random card. The exception would be in the case of a stacked deck, but if a stacked deck could be arranged, then a normal cooler would probably be a lot more effective than seconds. My guess? A rough session and a rude dealer.

Stanford Wong: Actually, dealing seconds is not as difficult as you might think. Coordination is not my strong suit, but I taught myself to deal seconds in a short time. An expert watching me closely could have detected my seconds, but friends playing bridge never had a clue that sometimes they received the second card instead of the top card.

Dealing seconds without some knowledge of the top card or the second card is worthless. Gaining that knowledge is difficult to master. I never tried peeking myself, as I have no need for the skill. I never cheated the people I dealt seconds to.

River City Assassin: The double-deck pack in my original question was machine-shuffled, so I doubt the deck was stacked. I'm aware of the tendency to ascribe "unlucky" outcomes to nefarious acts. It sounds like maybe this was just an unlucky swing.

Hindsight is 20-20. After the fact, I realized that I should have been looking at his eyes to see whether he was somehow peeking at the cards. Thank you all for your help. I will know what to look for next time I have this suspicion (which isn't often).

Lonesome Gambler: The comment I made about the degree of difficulty was regarding dealing seconds dealt at an expert level, and trying to detect such, both of which are near-impossible if you're not also an expert. I've never been caught dealing seconds while performing card tricks to friends at the bar, but anyone with even a basic understanding of the move would nail me immediately (hence only showing tricks to my friends in bars). Dealing to friends in a bridge game is a similar situation, only with even less heat, as your friends are less likely to suspect funny business during a regular bridge game than a spectator during a card trick will be.

The peek is not difficult, and if done right, it should also be difficult to detect, even if you're making an active attempt to watch the dealer's eyes (most of this stuff is done well before you start looking for the move).