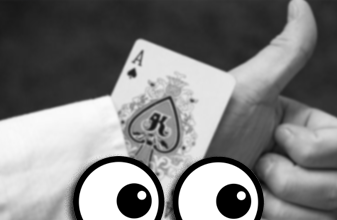 Here are a few basics on hand-held decks:

There is a myriad of ways for the dealer to peek at the top card(s) or the bottom card(s) while she is holding the deck or dealing out the cards. Magicians will use any variation of the bubble, whereby the thumb squeezes backwards the top card so that a peeking "bubble" is formed, but this takes a couple of seconds more than a dealer has time for. The cheating dealer will peek at the time she is dealing out the cards, using any kind of trick. She will bottom-peek by lifting the deck just a little more than it needs to (the action looks legitimate because she is supposed to shield the deck away from the players' eyes) or she will top-peek by an "absent-minded" riffle of the cards with the right thumb (leaving the top card exposed for one fraction of a second), etc. The thing to do is to watch the dealer's eyes: This is the deadliest counter weapon. Unless she is wearing dark glasses you will be able to tell where she is looking at all times. She is supposed to look very rarely at the deck she is holding and concentrate on the action at the table.

Dealers can control cards from the discards (or pre-peeked cards) in a lot of ways through the shuffle. Steve Forte's series of Game Protection is one of the most complete demonstrations of dealers’ tricks in this field; it includes most false shuffles, false cuts, ways to nullify the cut (restore the cards in their pre-cut order), etc. The Protection Series videos are the cat's meow but the book is also prime cut and you might prefer it.

There are many books and DVDs that can teach people how it is done. Using freeze-frame and slow-motion on your instructional DVD is like having your own personal tutor in cheating and magic.

Instead of using all-out moves, a cheating dealer may opt for the easier, yet riskier (if the deck is examined closely) method of pre-prepared decks of cards.

Magicians and cheats use stripper decks routinely. A stripper deck is comprised of cards whose width has been "shaved" (trimmed) ever so slightly, in one of two ways:

1. The target cards, e.g. aces and faces, are left intact, and the rest of the cards are trimmed at the sides (their width is shortened). This way the target cards are slightly protruding when the deck is squared. The dealer can feel in his fingers the protruding cards when she holds the deck. The dealer can draw out of the deck imperceptibly as many aces and faces as she wants.

2. All the cards are trimmed at the sides, but they are trimmed more at the top than at the bottom. Imagine every card to be like an isosceles trapezoid , though of course not as exaggerated as that. If the dealer squares all the cards with the trimmed tops looking up, then the deck looks and feels like an ordinary deck. All the dealer has to do is reverse his selection of target cards, e.g. three Aces. Then those Aces will be protruding at the top, because their width will be larger there - and the dealer can control them.

Stripper decks are available commercially (example), but some people prefer to work their own magic.

Everyone has heard about seconds. This is where the dealer deals out the second card from the top, keeping the top card for herself or a confederate at the table. Again, there are many variations of the trick, mostly involving the use of the top card as cover for the action of sliding out the second card, picking it clean and dealing it out. A good cheater will do this under the closest of examinations and still fool the spectator, even when the spectator has been warned. But since most cheaters are not that good, the player should try to hear out the characteristic snap sound made by the sloppy dealer who drags out the second card clumsily (it sounds like shhhh-lack!).

Bill Zender describes most forms of casino dealer cheating in his seminal How To Detect Casino Cheating At Blackjack.

There's a whole chapter dedicated to "Retaining the Top Card" and a detailed presentation of all topics touched upon above, and a lot more.