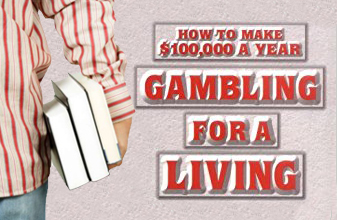 About twenty years ago, David Sklansky and Mason Malmuth wrote a book titled How to Make $100,000 a Year Gambling for a Living. I've never read the book. It's panned by many as a pretty fluffy piece of literature and I've always thought a good idea for a book would be a reboot of this concept.

First, I'd say that $50k/year is hobby level income. Even $100k/year is barely making a living depending on where you live and how you live. As others have mentioned, this is a filthy, tiring, stressful way to make a living. Stanford Wong has always said if you are able to be successful as an AP, you're probably the type of person that can be successful in other careers. Is being an advantage player ("AP") the best use of your time and intelligence? Before I went pro I had a stable comfortable career with a salary over $100k and good benefits. However, I also had a hellish commute and a growing distaste for upper management. I opted to go fulltime because it would allow me to work from home and make more. It wasn't the easier career of the two, but it was the choice that was the best use of my time and intelligence. The average US worker works about 2000 hours/year. So any amount of time over 2000 hours/yr that you spend in pursuit of AP income should be considered opportunity cost against what you could make working less in the real world.

So how does one make $100k/yr counting cards? Well, first you need to plan to make $200k in EV. Planning more EV than what you need is critical because almost all AP's overstate their EV. They fail to properly estimate game speed, minor mistakes, travel expenses, or something as trivial as a backoff being more likely to come in a high count when raising a bet. If we assume you are making $250/hr in EV (after expenses), the formula becomes clear. You'd need to play 800 hours a year to equal $200k in EV. If you've got a higher hourly than that then adjust accordingly. Are there enough places left for you to log the hours necessary to hit that number? How much travel will you need to put in to reach that number? Playing 800 hours leaves you only 1200 hours of travel and prep time before you pass over the 2000 hour mark.

However, there is an even bigger opportunity cost that needs to be factored in. It's an equation that I don't have the exact numbers for, but essentially it goes like this:

For every (x) hours you spend counting cards you effectively kill off (y) future hours of your career.

If x is low enough or y is high enough, then there is definite opportunity cost to making a living counting cards. Card counting is an effective form of advantage play. It's relatively low variance and mathematically proven. However, it's also ridiculously easy for the casino to pick off. There's not a lot about straight counting that hasn't already been theorized, written about, and read by the masses. Database systems like OSN and Biometrica greatly shorten the career of an AP. Once your name is tainted, it's very tough to get the hours for the levels you need to make a living. By counting cards aggressively, you need to accept that you may never be able to practice some other forms of AP because card counting got you 86'd or burnt your name out severely. There are ways around this...but they require more travel (since heat is generally regional and casinos are more collegiate than we tend to believe), more anonymity, and a willingness to legally change your name.

The Stereotypical Card Counter
August 19, 2021 5:20 pm
Yes, this is the book that got the Church Team interested early on.