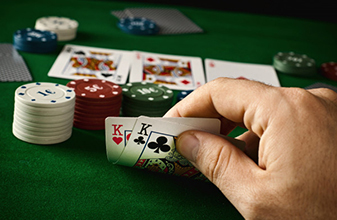 Optimal blackjack bet sizes, including zero when you do not have an edge, are based on mathematics and computer simulations. These are the amounts you would like to bet if you could bet any amounts you want. But of course you cannot bet anything you want — your bet size is subject to constraints. There are minimum and maximum bets. Only certain bet sizes are accepted. If casino employees are scrutinizing you to evaluate your ability, you might impose additional constraints on yourself. On negative counts: If you cannot bet zero, then bet the minimum you can get away with. If you play a spot, that spot gets cards. If you leave that spot blank, the dealer does not give it any cards. Playing one more hand thus uses more cards, and may mean fewer rounds before the shuffle. For example, if enough cards remain for three more head-up rounds of one hand each, you will get only two rounds if you play two hands each round. Which makes more money, three single hands or two double hands? The answer depends on how much you are betting per hand. It also assumes that the dealer will not have to shuffle until at least one subsequent hand. (If this is the last round before the shuffle no matter how many hands you play, then optimally if you have an edge you should spread your money over as many hands as possible.)

If you are alone at a table, if you have an advantage, if your optimal bet size for one hand is less than the table maximum, and if another round will be dealt after this one, then it does not matter much whether you bet one hand or two, but do not go to three hands. To go to two hands of optimal bets is to bet about 150% as much per round as to play one hand per round. And to add a second hand is to use about 150% as many cards. You will get 2/3 as many rounds before the dealer shuffles, but you will be betting 150% as much per round, so two hands at a time has the same profit potential as one hand per round.

Adding a third hand and making optimal-sized bets would add 12% to your total bets but would use 33% more cards, and thus result in lower overall profit potential.

If you are the only customer at a table and the dealer has the advantage, your optimal action if you stay is to play one hand at the minimum. To play two minimum bets at a time would be to bet twice as much on each of the two-thirds as many rounds before the shuffle, for 33% more unprofitable action.

Therefore, if you are the only customer at the table, it makes sense to play one hand at a time whether or not you have the advantage. This advice holds if your optimal one-hand bet size is less than the table maximum.

One Other Player and High Limit

If there are other players at the table with you, your adding an extra hand adds a smaller proportion to the total cards used on one round. You would bet 50% more with two optimally-sized bets instead of one, but with one other player you would use only 33% more cards per round. This means you are better off playing two hands if there is another customer at your table and you have an edge.

Do not go to three hands of your own; your third hand would use 25% more cards but your total bets (with optimal bet sizes) would increase by only 12% per round.

With two or more other hands played besides your own, you definitely have a larger expected win rate playing two hands yourself when you have an edge. Increasing to three hands of optimal-sized bets will win you a tiny bit more money but will attract a lot of attention that you may not want.

Another Argument for Fewer Hands

Your optimal bet size changes as your advantage changes, and you would like to estimate your advantage as closely as possible. Playing fewer hands means estimating your advantage more often between shuffles, hence more precisely. For example, suppose you are playing two hands at once, and suppose your first hand is 10-10. Your second hand can be thought of as coming from a pack that is poorer by two 10s than the pack you used to estimate your advantage to select your bet size. Had you known in advance that those two 10s would not be available to your second hand and to the dealer, you would have bet less on your second hand. The existence of this precision factor suggests being hesitant about playing another spot when a few cards could cause big changes in the count per deck.

Mark R Gery
September 3, 2021 2:21 am
Recently, I have been playing two hands when the double deck is Ace-rich with at least an overall 0 or plus count between 10's and low cards. (I use the Canfield Master Count: 1,1,2,2,2,1,0,-1,-2) I reason that the Ace is supremely valuable as a dealt card, but not a hit card. So, with two hands, I get 4/6 of the dealt cards rather than 2/4 with one hand. What do people think of this strategy? I seem to have won significantly more than before.