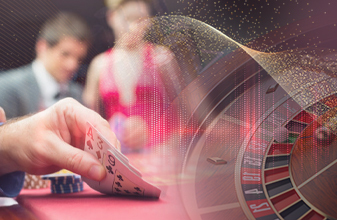 In Beat the Dealer, author Ed Thorp says he started out with a 1:10 bet spread. When that attracted too much attention, he cut back so that his big bet was a smaller multiple of his small bet.

Bet variation is tolerated better now than it was decades ago Perhaps this is due to the increased number of Asian customers in casinos now. In Macau and other locations in Asia, huge bet variation is the norm; if the table limit is 10 to 2000 in local currency, most customers seem willing to bet 10 for a starter and progress to 2000 if they hit a winning streak. If casino employees see enough bad blackjack players use huge bet variation, then a card counter using big bet variation can blend right in.

Try to avoid any sort of a pattern. For example, if you realize that for the last ten minutes you have been betting only one or two green chips each hand because the count has not gone high, you might pop out eight greens on the first round after the shuffle. Your expected value is negative on that one bet, but it buys you the ability to bet eight or more green chips on the next good count. Do not use bet variation in a mechanical manner. If the count calls for a big bet, just grab a handful of chips and place them in the circle. If you want to bet $500 and you are betting in all green chips, for example, you may actually have $500 out there, but if you did not grab exactly the correct number of chips you might bet $475 or $525. People do not seem to pay as much attention to how much you bet as how you bet it. You would probably get more attention carefully counting out $400 than by quickly grabbing a handful of chips that happens to total $525.

A side benefit from betting odd amounts is more dealer errors. A drawback is game pace is slowed by odd-amount payoffs on naturals, and the errors that go against you. Bet what you can get away with rather than trying to bet an optimal amount that depends on the count. If the count is negative, try to bet the least you can get away with. If you have an edge, try to bet as close to the optimal amount as possible with the constraint that you want your bet size to look natural to whoever is watching.

These days with barely anyone in casino's and after you've got to know your local dealer..... It does require more and more energy to ACT like a gambler all the time.

Hopefully I can sort of adopt and hardwire these skills into your play so it's almost sub conscience and automatic.