Splitting Strategy in Blackjack: When and How to Do It? [It’s Like Wearing a Tuxedo] 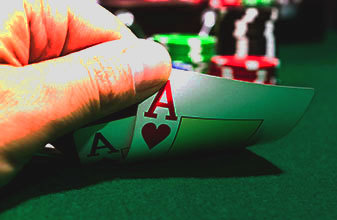 Whether you play blackjack at a land-based or online casino, there is a moment that irrevocably may define the outcome. The decision is called splitting. It is the situation when you’re dealt with two hole cards and have an option to split the hand into two. Doubling your initial bet and raising the stakes, you can make such a strategic decision once, right after the first cards are dealt. An enticing and exciting opportunity, indeed, is something you need to know when, how, and why to use.

Splitting in blackjack may be compared to the tuxedo.

As one of the most elegant garments of all times, it dates back to 1865 and the Prince of Wales, future King of the United Kingdom of Great Britain Edward VII, as the Business Insider tells the story.

Looking for a bit more formal suit, a Savile Row tailor created the “dinner jacket,” for his highness. Intended as an ensemble to be worn during dinners at the Sandringham House, it was “a more formal than a lounge suit,” yet appropriate enough for informal Royal evenings.

Twenty years later, American millionaire James Brown Potter and his wife Cora visited the future king. Not acquainted with proper dressing code, Potter inquired at the Prince’s tailor what he should wear; he got his own dinner jacket as an answer.

The suit instantly took off and was eventually named by the club where it premiered.

Enjoying quite an interesting evolutionary journey thus far, the tuxedo distinguishes itself from other garments by firm rules on when and how to be used.

To wear it right will result in being noticed in a potentially beneficial way; the princess you’re eyeing may realize her prince has just arrived while a businessman you’re pitching will, if nothing else, listen to you seriously — always a potent start.

Then again, to wear the tuxedo at high noon in the street or at the pool party or at night club might make you look quite strange, maybe even provoking — all eccentricities aside — and your social interactions will probably suffer. Though nothing is impossible and you still may get it right, you’d fare much better if you select your wardrobe a bit more properly.

The same is with blackjack splitting: there is when and how to use it. 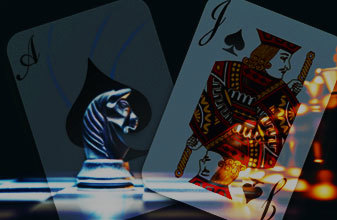 Play it right and you might double your winnings; do it wrong — well, the outcome is obvious. Luckily, blackjack strategy covers splitting extensively, thus at least you have a theoretical baseline when it comes to one the most difficult aspects of the game.

Your initial moves and options are, of course, defined by rules.

When the first hand you’re dealt with consists of same denomination cards — such as two 4s or 9s — you can split them into two separate hands. Your standard bet will be placed on each hand, in effect doubling your wagering amount.

Upon the split, each hand is treated separately. You can play both independently and employ whatever tactics you deem proper at each one.

When it comes to online blackjack, splitting rules might vary depending on games variants.

For instance, if you split 10s and get another 10 on one hand, you can split that too; it’s known as resplitting. Majority of variations and house rules allow it for up to three times (totaling four hands), but some don’t. This one is important; by depriving you of this option, casinos in effect increase their house edge by 0.4 percent.

Same is with splitting cards with the same value. Some games will let you split a 10 and a Queen, others won’t, allowing only for identical cards to be split.

You may also stumble upon an online blackjack variant which does not allow doubling down after splitting. In the example, you split a pair of 6s and receive 5 at one hand; some games will let you double down on 11 after the split, others will not.

Don’t miss the opportunity to read or inquire on blackjack rules carefully.

They will define what you can or can’t do when it comes to splitting, and influence your strategic decisions.

In addition, when you play blackjack at a land-based casino — there is a way to signal split to the dealer. You simply place the next bet close to your original wager and form the letter V with your index and middle fingers. It won’t hurt to also say ‘split’ if you consider it necessary or the casino employs such alternate rules.

Whatever you choose, don’t touch your initial bet or cards at the table.

Your Strategy is Governed by Principles 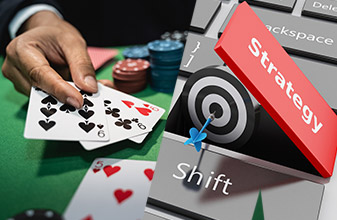 Now, splitting pairs wisely can be a huge boost for your game. It is one of the most common moves in the game and to know when and how to do it is super-important for the outcome of your game.

(Side note. Blackjack schools of thought on splitting vary, depending on rules, calculations, and experience of players. Therefore, you should indeed take all of them as nothing more than opinions, and form your own dos and don’ts based on a good mix of knowledge and personal experience. In gaining both, do not take anything for granted.)

CONSIDER TO SPLIT when you’re dealt with aces and eights no matter what the dealer has.

Why? If you play two aces in one hand, you’ll start with 12, and any 10 or face card will prompt you to play the second ace as a value of one, reverting you to 12. By splitting, you increase your chances for better hand afterward.

Same is with 8s: by playing them as one hand, you start at week 16 where hitting is kind of a risky. By splitting them, you won’t be bust in the next hand (it’s impossible) and you might get a better hand.

The advice to split 8s and As also works for resplitting.

If you get a second pair, treat them as the original hand and consider splitting. One very important reminder: by resplitting, you triple your original wager.

The rest of the split options depends on the dealer’s hand.

(Side note. You’ll notice that some players advise not to split 9s by default. Pros: it’s already strong hand, 18. Cons: you might get two strong hands in the next hit. Debatable. Thus, we put double 9s in the category depending on dealers up hand.)

Splitting 4s will give you two weak hands. Next card might either give you another less-valuable hand (if you get 2, 3, or 4) or one that might result in a bust on the next hit. If you don’t split, the highest you can get is 19, which is a very good hand.

Splitting 5s is perhaps even worse. If you get 2, 3, or 4, even 6, you’ll have a weak hand quite possible to be busted out in the next hit. But if you don’t, you have 10, which you can’t bust right away while keeping a chance for 21 alive.

Splitting 10s is a rookie mistake. You have a second-best hand in the game which is not worth jeopardizing for any uncertainty, including the theoretical possibility of two blackjacks in the next hit (which is a question of blind luck). By splitting tens you significantly lower your chances and gamble almost certain win away.

Final Notes: Earn & Own Your Principles 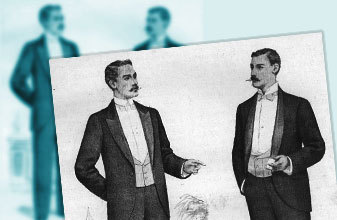 Naturally, wherever there are rules, there is a maybe — a very fine line separating win and loss in any walk of life. Sooner or later you’ll find it in blackjack too. As with any game of luck and skills…

Such maybe line should be evaluated in an educated, prudent, responsible, disciplined, and objective manner.

What will you do — short of remembering to split only when the dealer faces the unfavorable situation — is indeed up to you. To make a right call is not easy, of course, but is something we should always strive for, particularly when facing the game with the best house edge in the industry (the credit shared with craps).

At the end of the day…

Listen to yourself, use your knowledge, intuition, tact, style of play, find reputable sources and personal authorities you’ll use as trusted advisors, and make your pick wisely.

In a way, do it as you would choose the tuxedo, readying yourself for that princess.

Dog Hand
July 9, 2019 9:51 am
Ha ha ha... Glad to see that bj21 is now soliciting humor articles! This one was especially funny, especially the line: "split only when the dealer faces the unfavorable situation", which is in direct contradiction to the prior advice to split 8's regardless of the dealer's upcard. In addition, the numerous (I hope intentional) typos as well as the syntax and grammatical errors also made me chuckle.

Keep up the hilarious work!

P.S. If by chance this article was meant to be taken seriously, then I hope it is quickly removed before its poor advice is taken to heart by gullible readers.

Ace Hunter
July 9, 2019 2:04 pm
I agree with Dog Hand. Any of the usual books on Blackjack and the Wizard of Odds will provide charts with the correct splitting strategy.

The tuxedo story was amusing filler.

Thank you for your comments.

Every advice covered in my article is based on Michael Shackleford’s splitting strategy. In effect, I only followed the Wizard of Odds’ rules on splitting. In retrospection, I should have referred it in the article — would probably clarify my source.

Regarding my notion at the end “to split only when the dealer faces the unfavorable situation” – the idea was to yet again underline all cases except for aces and 8s. In the hindsight, you’re right, it might have been written more clearly.

I hope this feedback explain what I meant to say.

Thank you again.
May the blackjack force be with you!