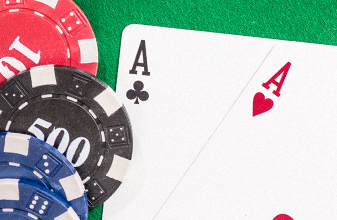 I frequently wong and play two hands. This is more difficult on five and six-spot blackjack tables vs. the standard seven-spot table. Is there a good reason why many casinos use five and six-spot tables? I would expect they'd make more money with seven-spot tables since they would need fewer dealers and pit critters as well as generate more decisions per dealer's hand. Does a casino get more decisions per hour dealing to fewer spots?

SammyBoy: Boomtown in Harvey, LA long ago had a single-deck game which was positive EV off the top. The tables had seven spots and they always dealt two rounds. That was fun, although they had some of the meanest ploppies around. I saw them run out of cards a few times. No big deal, they would shuffle the discards and finish the hand. I should say they always dealt two rounds or more.

ECBJ: Every time you add another player to a table, the total decisions per hour goes down. If a casino had 35 customers, it'd get more decisions per hour with seven five-spot tables than with five seven-spot tables. The difference is probably more than enough to justify the cost of two additional minimum-wage dealers and perhaps one more floorperson, especially on high-limit games. I have wondered if five and six-spot tables are put in to deter wonging, but tend to doubt casinos are smart enough to think it through that far.

I don't care what sort of tables the casinos decide to install. If I'm wonging, I'd prefer seven-spot tables, but if using a play-all spread, I'd prefer five-spot tables. I know that I'm not always going to get the setup that is ideal for both scenarios and will often adapt my strategy to make the best of whatever environment is presented to me by the casino. However, I absolutely hate the nine-spot tables. While you can generally get the two spots you want to play when wonging, the slowness of the game, and the card-eating effects at a full table is ridiculous.

Cougfan: There is an interesting AP angle for five-spot tables if you have a partner. Have your partner play two hands for a little while and then wander off to another pit. Before he or she leaves, they lock up the two spots. Now if you are playing two hands, you get 2/3 of the table to yourself. You can do the same thing at your partner's table, so you each get to play close to a heads-up game. Just make sure to switch tables once in a while so they don't pick up your chips that are left at the "other" table. Obviously, this only works at places with more than one pit.

You can do a variation of this if you have a non-AP friend along and can convince them to play blackjack for a little bit before they hit the slots, or whatever.