The Myth of the Long Run 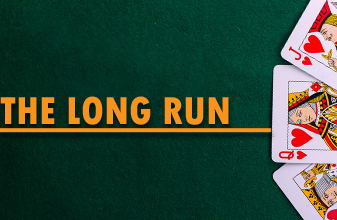 Often, we see posts from folks espousing the point of view that card counters with their endless simulations involving billions of hands can only prove that their systems work in "the long run" and that card counting doesn't mean much to the average player who is always in "the short run." These posts go on to claim that methods utilizing stop losses, win goals, table departure after "x" number of losses, betting progressions, or knowing when you are in the middle of a winning streak or losing streak and taking the appropriate action are the only way to win at the tables. Sometimes, folks claim that the play of others affects you in the short run and that's all that matters. All these claims are based on the rationale that, since we can never get into the long run, card counting is futile.

Stuff and nonsense! What the sims do is identify the advantage a card counter has, based on the system she might use, the game being played, the rules, the penetration, the bet spread or a host of other factors that can be considered. In order to identify that advantage, billions of hands are played.

The fact is, if she or he can play proficiently, the counter has that advantage whether playing one session or a million sessions. Consider the game of craps. The casino has a 1.4% advantage on the line bets, not much different than a card counter has. Yet, your play at the craps table is short run play. Sometimes you win and more often, you lose. You know when you hit the table that the odds are you are going to lose money. The more you play, the more you will lose. Are you ever going to play a billion hands of craps? Not likely. The casino is going to beat you in the long run and it's going to beat you in the short run too, unless you decided to play one session for life and you were lucky enough to win that session.

What a card counter does is turn the tables. She possesses the advantage, not the casino. She is going to win more of those short run sessions than the casino can win. The more short run sessions she plays, the more likely it is that she will win. The casino knows this truth and applies it in craps, roulette, slots, keno, basic strategy blackjack or any other casino game you care to mention.

The one great advantage the casino has that a card counter may not have is it's virtually endless bankroll. It can sustain short term losses that card counters sometimes cannot sustain. However, the sims can tell us just how bad those short term losses can be and we can prepare for them by using appropriate betting levels for the bankroll we have, based on information the sims have given us.

Will we ever get into "the long run" of billions of hands? No. It doesn't matter. We still have the advantage. We have it every time we play. That's good enough for me.