How Important is the System? 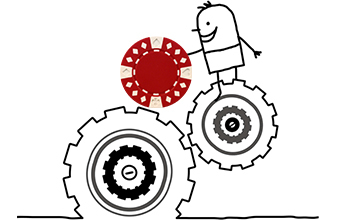 Frequently, we see posts asking which system is best. Until we started getting spamming requests, many of us would answer by recommending the system we were personally using. After all, it was working for us, so why not recommend it to a newbie?

The fact is, any of the reputable systems discussed by us on these pages and advertised on the Ads Page here will work. Each of them has their advocates, and each of them has some feature which may make them more or less attractive to one of us or another. However, those of us who are successfully playing these systems know that there is far more to the game than the system played.

Any system that accurately tells a player when to bet big is going to work. Given the vagaries of standard deviation, personal results from using those systems will vary all over the ballpark. AO II is technically a more powerful system than KO, but that doesn't mean that any specific AO II player will make more money than any specific KO player. In fact, the opposite is often true.

There are other factors at play which are far more important than the system used. I wonder if we are really doing newbies a favor when all we do is recommend a system? Shouldn't we be telling them about those factors? There are considerations that any serious student of the game ought to be using that far outweigh the specific counting system in use. These include things like playing accuracy, bankroll, risk of ruin, betting schemes, game selection and cover. In the end, those are the things that bring in the money and keep a player at the tables, not the particular system in use.

No matter what that system is, if it can't be played with accuracy and effortless ease, it is likely to lose. A system that cannot be played accurately is probably worse than no system at all. When choosing a system, choose one that can be played perfectly. Less than perfect is going to cost money. I might have a powerful V-8 engine under the hood, but I won't win any races if I'm only running on seven cylinders. Blackjack systems work the same way.

If one doesn't have an adequate bankroll, and is not aware of what kind of risk of ruin is faced with that bankroll, the odds are high that such a player will simply run out of money before that player can give the game an honest chance. Like any other risk-laden venture, adequate financing is the building block to lasting success.

Closely related to bankroll is the kind of betting scheme one should use. If a counter is going to have long-term success, that person is going to have to know how to bet. For example, a 1-4 betting scheme may work fine in single deckers, but it isn't going to earn any money in six deckers. Knowing when to bet the maximum or spread to two bets, when to bet the minimum and when to run are important to lasting results.

Game selection is also paramount to winning play. If someone is playing consistently in lousy conditions, he or she isn't going to win any money over the long haul. There are some casinos offering horrendous games. I have seen places that cut three decks out of six, or that offer very bad rules. If a person insists on playing those games, the system chosen isn't going to make a lot of difference. Yet we often see counters using the excuse "that's the only game in town." So what? If the only booze in town made one go blind, would you drink it? If that's the best a person can do, then he or she should save the money and take trips to venues that offer playable games. Just because it's close to home doesn't mean it has to be played. If one can't do that and insists on playing unplayable games, then maybe that person ought to examine whether he or she is really an advantage player or just a gambler, like the rest of the folks in the house. If a player can't afford to get to the better playing venues, then one wonders how that player can afford to play bad games and give his hard-earned money away. After all. a round trip ticket to Las Vegas can be had almost anywhere in the USA for less than $300. Mississippi is less than a day's drive for at least half the population in the country. Why would anyone play at some podunk riverboat casino that offers atrocious games when better games can be had for a relatively small cost? (upfront apologies to those who live in Europe, Australia or elsewhere and just don't have easy access to good games)

Of course, if someone is in the game for the long run and is playing for high enough stakes, then cover becomes a major concern as well. The most efficient playing system in the world is worthless if one can't play anywhere. In order to survive, cover issues must be considered and a style of play developed that can contribute to longevity. There are those who believe that good blackjack is fast becoming a thing of the past and say "the devil with cover, get it while you can." I suspect they are wrong, and will soon be sitting on the sidelines watching others raking in the chips.

I know these words sound harsh, but newbies asking which system is best ought to be considering the issues I have discussed above. Blackjack is a cruel game and it does not suffer fools, gladly or otherwise. If a player hasn't dealt with the points I have stressed here, his career will be short regardless of the system he has chosen.