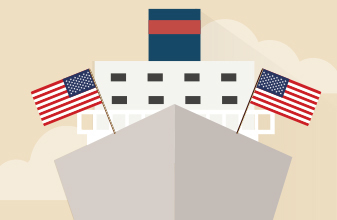 Those traveling and gambling on cruise ships leaving from the United States with itineraries that allow disembarkation in foreign ports must be careful to declare their bankrolls before disembarkation if their funds exceed $10,000. You cannot simply say to yourself, "I will not be taking the cash off the ship into a foreign country anyway, so why should I worry about it?" The reason is that you will be required to pass through U.S. Customs at the conclusion of your cruise. If you are carrying more than $10,000 in currency or monetary instruments, you will have to declare it at that time on FinCEN Form 105. The Customs inspector will ask you for the source of the currency. If you have properly declared the money before departure, you simply show him your pre-embarkation copy of FinCEN Form 105 and account for the difference between what you declared initially and the current value of your bankroll. If you have not declared your bankroll exceeding $10,000 before departure, and the cruise ship's casino cannot verify your having won that much on the cruise, you may have some explaining to do. If that explanation includes your failure to declare a bankroll exceeding $10,000 before disembarkation, you could have a problem. That problem could potentially include forfeiture of the entire bankroll.

The problem with this is that Customs sets up cruise ship travelers for failure. Cruisers do not typically pass through U.S. Customs as they embark on their voyages. Thus one can innocently violate the $10,000 declaration rule. The solution is to have some blank FinCEN105's (downloaded from the U.S. Customs website) with you before departure. Fill out the form well before departure, being sure to include the contents of your wallet. You will have to seek out a Customs inspector at the cruise ship terminal and give him the form before departure. He will sign the form and stamp it. Retain the form to show the inspector as you pass through Customs at conclusion of the cruise.

One can avoid the entire issue by obtaining a credit line in advance from the ship's casino and carrying a bankroll of well under $10,000 onto the ship. After settling up with the ship's casino upon departure, you will have a remaining bankroll. If it now exceeds $10,000 you will have to declare it to U.S. Customs as you leave the ship. In this case you would declare your currency on FinCEN105 and verbally declare your casino winnings to the inspector. Your declaration and the casino's estimate of your winnings will probably not be far off. A problem may arise if you have well over $10,000 on you upon your return, you failed to declare a large bankroll well exceeding $10,000 before you left, and you cannot account for the difference.